There is only one place to go on a Friday or Saturday night in Istanbul. 360 is a restaurant, bar and club named after the amazing, wrap-around view of this penthouse location overlooking the Bosphorus and all the way out to the Sea of Marmara. Ask anyone and they’ll tell you it’s at the top of the Misir Apartment building in one of Istanbul’s busiest shopping areas, Istiklal Street.

If this city is where East meets West, there is no better place to see, feel and taste it than 360. Up eight flights (there is a lift), is an oasis where the weariness of traversing an overcrowded city under-serviced by transportation, melts away. Low lighting that makes everybody look good, and a DJ who knows just how to transition from dusk to dark create a mood that’s instantly uplifting. The soft grey sky is illuminated by the flocks of seagulls sweeping over the city. 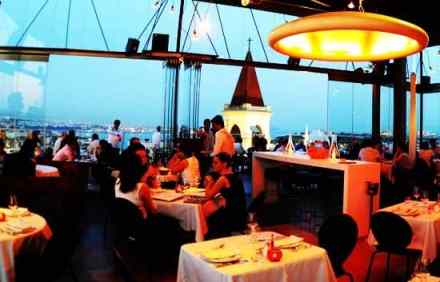 The concept of 360 is a symbiotic energy combining design, atmosphere, entertainment and cuisine.  An open, fluid space walled with windows immediately invites a stroll out onto the rooftop patio.  Thankfully, the weather is kind and the view goes on forever. There’s as much eye candy outside, with the panoramic vista, as there is inside among the patrons and the avant-garde performers (but we’ll get back to them a bit later).

What surprises me most about 360 is the clientele. My dinner companion is Damla Atalay, a 30 year old maritime lawyer who hangs out here almost every weekend. She tells me 360 is one of those rare breeds that’s popular with both locals and tourists, which means it’s a fantastic way to dip into authentic Istanbul nightlife. In fact, we’re surrounded by Turks, Russians, Asians, North Americans and Europeans of all ages.

We order stuffed zucchini flowers to start, when we’re joined by Sashah Khan, one of the partners behind 360. Khan is a perfect representation of the place. Born to an Austrian mother and Afghan father, he was schooled in Britain.  After a few years globe-trotting, Khan settled in Istanbul, perhaps the perfect place for someone who grew up in between the cultures of East and West.

The music moves from a loungey mix of New York meets North Africa, to a revved up clubbing beat, without being in-your-face. 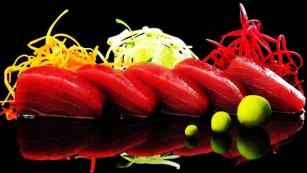 One of the benefits of dining with the owner is special treatment. Sashah is a fellow fitness fanatic and health food junkie. He swiftly orders sushi, sans rice and an array of fish and veggie fusion like aubergine and pomegranate molasses. Another favourite is an apple, walnut, and beetroot salad made even lighter and more refreshing by a drizzle of citrus vinaigrette which avoids being cloyingly sweet. The local sea bass is grilled to perfection, just what you’d expect of a South African chef.

After a few bites, we’re suddenly seduced by another fusion – the DJ’s tunes are joined by a beautiful violinist who amplifies the rich, deeply textured sounds. She floats around the room, causing more than a few chins to wag. And while she’s on a break, an even more exotic belly dancer does the rounds. This is all part of the entertainment element at 360…a perfect antidote to boring dinner conversation. Thankfully, that wasn’t an issue at my table.

360 is one of those places that seems terribly obvious. It’s won awards, and is in all the insider books. But sometimes those places are there for a reason – it’d be stupid to pass them up. This is the case with 360. My recommendation? Go for a drink at sunset, take in the view, then head inside for a few small dishes, and the other great views on offer.