The first sight of Mykonos as you approach from the Greek mainland is of a little white church on a small rocky island.

There are over 400 whitewashed churches on Mykonos and thousands of whitewashed buildings, but in some ways this one is the best because it’s small, perfectly formed and a tangible sign of the glories of whitewash to come.

Mykonos presents as a stunning array of like white buildings set densely amongst low, dry, rocky hills where the shrunken trees – never quite used to the absence of water – instead of augmenting the landscape seem to interrupt it. If you’ve never been there and want to know more, I’ll show you my new mouse mat.

On Mykonos there’s nothing much to do except to do very little. And it seems there are lots of people who want to do just that.

On our last visit some years ago, I incorrectly assumed it was only possible to get here by sea – now I observe jet aircraft arriving every 20 minutes. Full of people wanting to go nowhere to do nothing. My wife Ingrid and I embark on a long walk, first through the jewelry and souvenir shops in narrow streets crowded with tourists and vehicles too big to be there.

As we leave this behind, we weave our way through labyrinthine lanes until we emerge at a steep cobbled road with pensions and small hotels on either side.

We stoically maintain our ascent of what we term ‘Mount Mykonos’ reaching the icy summit (28⁰, 300 ft) with a fine view of the town and three cruise ships including Nautica on a deep blue harbour set against the barren surrounding islands. Photo time.

Back in town, a jeweller looks at Ingrid and exclaims “You’re a Jew!” “Well half Jewish,” says Ingrid, “how can you tell?” “Your nose,” he replies, to Ingrid’s irritation, “it’s just like mine.” “Shalom,” he says to me as we move off at a rapid saunter.

“I got more out of this dump from a postcard,” says an American. Why do they so often let their country down? Mykonos is exquisite, and they can’t recognise it.

Have you ever seen a large (say 1,500 passenger) ship weigh anchor? The Genoa-registered Costa Romantica leaves Mykonos at the same time as Nautica, giving off three mournful blasts on its siren while an excited Italian intercom voice and the distorted sound of bouzoukis badly playing the dance from Zorba floats across the 200 metres of water between us. 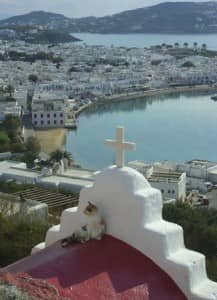 osta Romantica as, for 20 minutes, it slowly moves forward on its anchor chain. Then the anchor itself inches from the water as a large white inverted T. Perforce, it returns to the water and ascends once more. This formula is repeated a number of times.

Nautica begins to move as the Italian anchor continues to ascend and descend with increasingly frantic jerks, the crew unable to secure it. We sail off with the struggle continuing. Look out for Costa Romantica when you’re next in Mykonos.

I was once on a ship that literally dropped its anchor - the Oronsay on its way out of Denpasar in 1973. As a few of us passengers (we weren’t guests in those days) leaned over the rail watching the exercise, there was a deafening rattle of chain and a mighty splash as thousands of dollars worth of anchor disappeared into what was locally styled as the ‘Indonesian Ocean’ (the Indons never really getting used to the notion of it being named after India).

As the last of the chain, unconnected to as much as the bosun’s leg, gurgled beneath the bay, we Aussies looked on in great amusement; the moreso because of the black, bleak faces of the British officers.

So Nautica glides out of Mykonos to sail beyond the sunset and into the Aegean Sea.

Late at night, as I stand in the dark of our balcony and watch the stars, the Greek air force performs flyovers and stalks the ship for 40 minutes. By now we’re nearing the Turkish border and this kind of stuff beats real fighting I suppose.

In the heart of London’s lawyer district, and a short walk from theatre-land, sits one of the coolest, classiest multi-venue hotels in town. The Rosewood London, just a few steps from Holborn tube station, hosts the Gin Bar, the Dining Room and Scarfe’s Bar, which has become a destination in its own right. Let’s save …