My experience with AirBaltic is a bit of a surprise all aound.

Plus, when I saw that AirBaltic’s flights included a layover in Riga, their hub, how could I resist?

A chance to slurp up two new cities in one long weekend? No one needs to ask me twice. And that, my fellow travellers, is probably one of the best things AirBaltic has to offer … layovers in Riga. Spend two hours or two days, they don’t care, and they won’t charge extra for more time.  With cities like Tallinn, Vilnius and Helsinki just a short hop, or even a three-hour drive, Riga makes a great Baltic base.

Another surprise is the cult following AirBaltic seems to have. The Latvian state owns 99.8% of the plucky airline, and yet it’s so cool, you’d think it could only be a private airline.

There are only two million Latvians, yet AirBaltic serves more than 3m passengers. Okay, admittedly, many of their passengers aren’t Latvian, but those are still good numbers. And they boast 75,000 Facebook fans, enough to earn them a place among the top 10 airlines globally, for passenger-to-fan ratio.

Passengers are so loyal; the airline does a brisk business in branded products. They sell Samsonite luggage, bicycles, sneakers, and even cars. Yes, I said cars.

At first, I think it’s a gimmick.

“AirBaltic, the first airline to sell cars”… the Mini Cooper R56 to be exact, onboard. 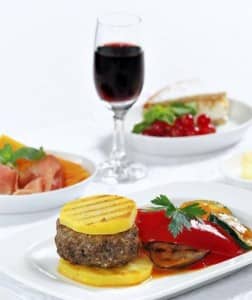 But as I land, I spot two white, green and black logoed Minis in the long stay car park. OK, one belongs to the CEO, but the other is just another loyal flier. The airline has a few things to teach other carriers about tapping extra revenue streams.

They even sell roses on board, which can be pre-ordered. I can hear the cries of cheesiness, but seriously, for a couple celebrating a special day, I can see a passenger forking out 20 euros for a bouquet.

But back to its real selling points … after all, nobody flies a carrier for its car offerings.

There’s non-stop service to Riga, Tallinn and Vilnius, with another 57 destinations across Europe, the Middle East and CIS.

They’ve also got a low fare calendar to avoid the guesswork with dates. And “Cherry Tuesday” is a weekly fare promotion.

It’s only available from certain cities, but basically you enter dates, and it guarantees a fare of 79, 99, or 109 euros to a surprise destination. For example, at 79 Euros, flying from Helsinki, you could land in Bergen, Copenhagen, Oslo, Stockholm, Tallinn, or Turku.

Spend 20 Euros more, and it could be Athens, Milan, Paris, Rome, and Venice. Destinations are revealed 48 hours before the flight, which could be a bit problematic for hotel bookings, but it’s perfect for those who like to just turn up and dig into a city.

And the surprises keep coming … including the catering. It’s by Latvia’s most famous chef, Martins Ritins, owner of Vincent’s Restaurant.

He regularly serves heads of state, royalty, and celebs. Ritins has single-handedly spear-headed the SLOW food movement in Latvia.

The in-flight business class menu incorporates healthy, local dishes such as prawns in a light saffron sauce, and a rhubarb dessert topped with birch syrup, an expensive and precious commodity. Latvia has only one commercial birch syrup producer because it takes so much sap to make the velvety, not-too-sweet liquid, so its appearance on my tray is impressive indeed. And refreshingly, even the meals available for purchase are healthier than any I’ve seen on other flights. 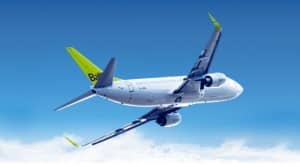 A grilled chicken salad for 5 Euros is probably a better deal than in any airport.

No in-flight movies, but instead, iPads are available on flights more than 2.5 hours. They’re free of charge in the front section and 9 euros in economy.

And staff are delightful. None of the grumpy service one finds on, say, Britain’s national carrier. Frankly, if AirBaltic offered a wider flight route from London, I might just become one of their platinum customers, but I’ll hold off on the Mini. 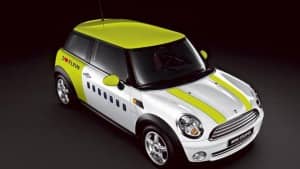