Nowadays the wind is used to power Bahrain’s megaskyscrapers, like the mighty turbines between the gleaming sails of the 290m World Trade Centre.

But for thousands of years wind towers were an ancient architectural technique used in Bahrain to cool buildings.  They’re now coming back into fashion, and it’s less about substance, and more about style.

The old city of Muharraq is filled with traditional Bahraini homes and buildings.  Everywhere you look, there are structures with the signature chimney, divided into four parts like an X, revealing the wind tower.  My guide is restoration builder Khaled Shoaibi. 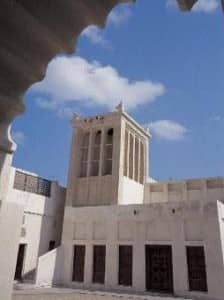 “What we say here in Bahrain is “Badgir”.  This is a Persian word.  It means wind-catcher.  The wind tower is coming from a lot of cultures.  In China they have it, India they have it, and Persia they have it.  It arrived here 250 years ago, only for the rich people, first of all.  When we have rich people, they travel and they see things.  They have masons come and do the design.”

The wind tower, or catcher, is an architectural device designed thousands of years ago to help create ventilation, acting as a sort of air conditioner. It functions by catching cooler breezes at higher levels and directing them into the interior of buildings.  We’re headed to a historical house to see how it works, as Khaled explains why wind towers aren’t actually practical these days.

“Usually they are used in a family setting.  Like to make coolness for the place they are sitting.  But now, they are doing just like a design, like a facade, but it’s still working.  They make it decorative to show this is part of the tradition.  Because of the weather and the luxurious life, people now have air conditioning so they don’t need wind towers now.  Our temperature is reaching 45-48 [degrees celcius] at the summer and here in Bahrain we have a lot of humidity. “

Khaled says that in this extreme humidity people often feel like they are unable to breathe. It’s for this reason that the “badgir” has been trumped by more efficient, cost-effective cooling systems. In spite of this however, there has been a resurgence in traditional Bahraini design, says Khaled.

“People still love the traditional style of architecture. I feel it more now than before.  A lot of people are trying to make their own houses reflect Bahraini design.”

Khaled and his partners are the only builders in Bahrain constructing traditional wind towers.

“The idea came from me and my partners to create a company that can repeat that traditional building and we should teach the Bahraini people or the Bahraini youth how we can build a Bahraini building.  We started to search for these people who have proper experience like the masons.  It was very difficult to find somebody with experience in that kind of building, but we found an old mason, the youngest is 60 years old, but they are in good health.  We brought young Bahrainis and gave them the concept of what we are doing. We want to repeat our tradition because you cannot find this even in a lot of Gulf countries.”

Khaled explains that places like Iran where there’s a big difference between daytime and night time temperatures, are better suited to the wind catchers which reduce the actual temperature by 5-7 degrees. We arrive in Muharraq to tour one of Khaled’s projects ...a new large, modern restaurant.  They’re building a wind catcher for a small outdoor patio where guests can smoke shisha.  In search of the traditional, we turn a few corners and head down some old alleyways until we arrive at the sight of Muharraq’s historical wind tower.

We enter an old home built of coral stone and in the family sitting room we feel the breeze come down the X-shaped chimney, swirling cool air around.   The coral stone they brought from the sea and cut like thin stone.

“See, you feel it.  It’s coming straight down.  That’s why they call it wind catcher.  They build it in the X-shape and keep it open in four directions so anywhere they can catch the air, and it drops down the chimney.   Usually we sleep on the roof in summer because it’s too hot.  We have wooden shutters and recesses in the roof to act as wind catchers, too.    It’s another type of wind catcher used as a parapet in the roof. “

The recess and parapet literally create a ricochet effect, directing the wind and cooling the space.   Khaled explains not every Bahraini family has wind towers...something he’d like to change.

“Not all the houses are building wind towers, only people who can afford it.  We are coming back to these things and trying to develop these traditional things to be suitable for modern buildings. It will take time, but for now people are interested at least to do something in the facade.  This is the beginning.”

Khaled is already working on wind towers in other parts of the Gulf.  If the revival catches on, the ancient tradition could prove more than a rich facade.