The pop up phenomenom gives Christopher Dawson the grits

Here’s the thing. In Washington there’s such a thing as the pop up restaurant. It was called America Eats. Here today, gone tomorrow.

This is the note from the web: “A word from America Eats (formerly Café Atlantico) Please Note: As of July 4, 2012, American Eats Tavern’s one year pop-up run has concluded. Thank you everyone for an amazing year. The response and support was incredible. We are seeking to find a permanent home for the American Eats Tavern so please continue to follow our Facebook.”

There can not be much point in building up a clientele if it is only going to taste your food on facebook. This is the grim bullying culture of Master Chef gone mad. It now means we can only sample food on the television or the screen.

A ‘Pop Up’ restaurant, or tavern in the American parlance, makes any review pointless. You cannot now sample its grits.

Not all of us are familiar with grits. It is sometimes called ‘Sofkee’ or ‘Sofkey’ and is a food of Native American origin common in South United States and mainly eaten at breakfast.

Grits consists of coarsely ground corn and is similar to other thick maize-based porridges from around the world, such as polenta or the thinner farina.

I cannot much remember the grits of the American Eats and therefore make no comment. But being born in Scotland, I like my porridge.

As with everything American, grits may be served with grated cheese. It can be offered with butter, sausage or country ham with red-eyed gravy.

Grits has been known to be served with fish such as fried catfish or salmon croquettes and a dish of shrimp and grits is considered a delicacy in South Carolina and Georgia. There is also Charleston-style grits, where the grits are boiled in milk, instead of water, for a creamy consistency.

The word ‘grits’ derives from the Old English word ‘grytt’, meaning coarse meal, and originally referred to wheat and other porridges now known as ‘groats’ in some parts of the United Kingdom; offering some insight into the aptly named Scottish village John o’ Groats.

A hearty meal of grits also featured in the 2010 American western film True Grit – however one must not confuse ‘grits’ with ‘grit’, a word meaning ‘courage’ or ‘small particle’.

I do remember the grits of American Eats to be fried, forming a firm block, and served with samples of other classically American foods.

Chef José Andrés brought the history of America to life on your plate, as dish is served with a ‘bio’, so your learn as you eat. For instance, lobster Newburg should probably have been termed lobster Wenberg, and the predecessor to the all-American macaroni cheese was vermicelli, prepared like a pudding, and inspired by a refugee from the French Revolution.

As well as crab cakes, there were Buffalo chicken wings that, according to one critic, looked “as if they passed through a beauty salon on the way to our table. The four boneless wings, glossy and plump, are artfully set-off with micro-celery and house-made blue cheese dressing”.

The meal was fun while it lasted. But American Eats only lasted a year in DC’s Penn Quarter.

If still determined to have authentic American tucker, there is a tavern in George Town offering the best hamburger in town. It is hard to make the comparison, but it does turn out a damned fine hamburger. 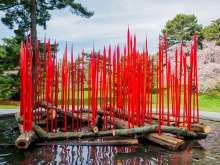 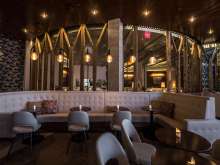 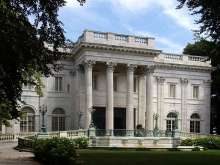