London is home to some of the finest restaurants in the world, but how do the city’s hotspots keep customers coming?

Many enlist the help of a secret weapon – a menu consultant. And it may be one of the best jobs around, for serious foodies.

I dropped in on a development meeting to find out more about the art of creating a great menu.

It’s lunchtime at The Folly in London, and while diners place their orders, food consultant Alec Howard has arrived to review the current menu.

“We work with restaurant and hotel groups to conceive, design and deliver pitch-perfect menus,” he tells Lunch Magazine.

Alec is the guy who’s watching all the food trends and reporting back to these restaurants to sex up their menus. The obvious question is just how much sampling is involved?

“Far, far too much. And I have the waistline to prove it. We’re probably out eating three nights a week. Some of the most exciting and edgy stuff will be in street markets and pop ups rather than three course restaurants.

“I’m looking for three things: something interesting with ingredients; getting ingredients to stick together in a way that’s unusual. I’m looking for a style of presentation or a carry of the dish that might then translate into a restaurant, but what I’m looking for most of all, is something that, when you’ve eaten it, you can still remember it the next day.

“That’s what we call addictively delicious, where the flavour’s dialled up in a way that just makes you want to come back, because that’s what drives customers back to a particular restaurant. “

I ask Alec for some examples of dishes that began from food market tastings.

“The thing that sticks in my mind initially would be a dish we developed around burger, but how you could infuse blue cheese in a burger. It came from a street vendor who had a fantastic 36-day aged burger in a sourdough bun with some blue vinney cheese on top, which is great in that environment. We then want to translate that into a more casual dining environment so we developed, through tests in the kitchen, a blue cheese stuffed burger which is addictively delicious.”

Alec’s job is sounding better and better. But there must be some challenges.

“Apart from keeping the weight off? The biggest challenge is to keep pushing your knowledge of what’s happening in the marketplace. It’s our job to make sure we know what’s happening everywhere.”

But another challenge Alec hasn’t mentioned is selling new concepts and dishes to chefs like Rob Mitchell, who oversees 65 chefs at The Folly, and four other restaurants.

“There are times when I look at a dish and I go, yes, it may be a great dish, it may work out on the river, but in my restaurants I have a very personal feel for the menu and I always voice it. The most important thing in our relationship is that we work together. We start off, we write down our ideas.

“We’ll have in the region of 100 dishes. And we’ll whittle that down to about 30 dishes and then from those 30 dishes we’ll start our cook offs. We often do the testing of the dishes on the specials of the day, that way we can get some feedback from customers, find out how many have sold, what sort of price range we can go for on that dish and also we can work out our costing and our profitability for that dish because, as a menu, it has to reach a good profit margin.” 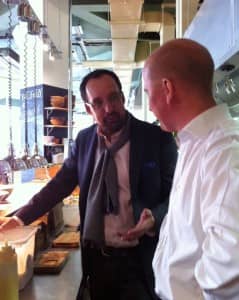 But some dishes are so addictive, I wonder if chefs like Rob could risk alienating his customers by removing them from a menu.

“Burgers, fish and chips, staple diets in England, that’ll never come off.  But it’s all the bits around the edge that you can play with, all the sides, salads, and starters … all those dishes that are very seasonal, you can change and it doesn’t upset anybody. If the chef’s done his job properly then he’ll have replaced it with something that you’ll re-fall in love with and won’t get bored.”

But sometimes the problem is the dishes that haven’t become addictive.

Alec and Rob discuss a salt cod hash on the menu that’s not a hit. Rob reports, “It’s not a winner with our customers. We got that wrong.”

They agree, if re-engineered into a fish cake, the cod could work.  Re-engineering isn’t the only tweak which can help strengthen a menu. Rob says the entire positioning of a menu can change just by playing with the wording.

“The idea is to get somebody who isn’t a chef, somebody who’s a bit more descriptive. We do the background work, they do their little slant with the wording, which together, makes a great menu.”

It’s time to start testing dishes, and Alec and Rob head into the open kitchen to come up with a new red trout ceviche. A discussion about slicing versus dicing results in dicing, to avoid uniformity. After dicing some red trout, and marinating it with a bit of chilli and coriander, we taste a wonderful ceviche.

Alec gives it his seal of approval, “The heat’s coming through quite well. It looks absolutely beautiful. This is gonna’ end up on the menu, isn’t it?”  Rob nods, “Ah, it could, possibly.”

And, another hopefully addictive dish, is created.