There’s still one more month to get to Milan’s World Expo themed around ending hunger and food waste.

While it offers a good glimpse (note: not samples) of food from around the world, if you really fancy digging in, and perhaps eating for the world, a self-drive tour from Bologna to Milan will do the trick.

It encompasses just part of Emilia Romagna, a region producing more food than anywhere else in Italy.

Second cities are often discounted, but in fact, cities like Bologna are rich in history and culture, and are much, much more manageable than their larger more touristy siblings.

The wood paneled anatomy theatre at the Archiginnasio Palace, the first permanent seat of the University of Bologna, is a fascinating place to ponder what it was like back in 1088, when the oldest university in the world was first established.

The city is also the home of modern still-life painter Giorgio Morandi, known best for his pastel jugs on tables and tree-filled landscapes. A museum dedicated to his work is just on the outskirts of the central square.

Salotto di Penelope, a small cooking school in the center of Bologna offers a great introduction to the region’s food, with a focus on local pasta.

We made a three-course meal of different kinds of fresh pasta and sauces, all light enough to keep going.

Run by business partners Barbera and Valeria, classes are fun, relaxed, and work around ‘free from’ requirements.

The most interesting bit was learning about all of the different pasta shapes and sizes and their specific purposes.

Wide strands of parpardelle, for example, are used for game in order to hold the thicker sauce.

I’ve saved the best part of Bologna for last: gelato. Few know Bologna is considered the birthplace of the creamy treat, where the first gelato machine was created in 1946.

In 2012, a gelato museum opened on the original factory site, about 25 minutes outside of Bologna.

But for a more convenient gelato experience, there’s only one place to go: Cremeria Funivia.

Locals line up for it in the evenings. During the day is the best time to go, when the Bolognese are at work or university.

This hand-made gelateria offers traditional, and more unique flavours, like my own favourite – Cassata di Sicilia, a creamy, ricotta base with candied orange peel. Go at the beginning of your trip. You’ll want to return again and again.

Modena – Lesson #1: There are two different products – vinegar and balsamico.

It is a serious offence to add the word vinegar to balsamico. Essentially, the two are distinguished by age.

Balsamico … You’ve got to take your time

Balsamic aged a minimum of 12 years earns the name.

Anything else is considered vinegar, spoken with slight disdain.

Either way, it all begins with whole grapes, Lambrusco or Trebbiano, cooked until concentrated by half, and then aged in wooden barrels, similar to wine.

It’s a process that requires timing and skill, ensuring barrels are turned appropriately to give an even flavour, absorbing the complexity of the cask. Traditional balsamic is certified and is only sold in numbered, wax-sealed bottles.

In Modena, these are only sold in quantities of 100ml, in stubby bottles like beakers, with a round bottom.

Prices for the good stuff ranges from 39 euros for 12-year old balsamic to well over 100 euros for 24-year old.

Farms such as Antica Acetaia Villa Bianca host visitors for tours of the vineyards and gardens and tastings in the cask room. This particular farm also offers food-oriented visits and other bespoke programs.

Ferrari and Pavarotti are the most famous names of the Modena region, and fans can learn more about each through dedicated museums.

The Ferrari museum is like a vintage and concept car showroom with a gourmet café on site.

A Ferrari and Pavarotti Land Passport, valid for 48 hours and 60 euros each, provides shuttles between the Ferrari Museum, the newly opened Pavarotti Museum set in the home the legendary tenor most recently lived in, with his possessions left intact, and films of the master and his music.

The grounds are lovely, with drinks served in the garden.

There are also optional visits to balsamic and Parma producers and Parmiggiano factories. Guests can also use the passes on a self-drive basis. The Pavarotti museum, even for less enthusiastic opera lovers, is well worth a visit.

Albergo Notarie in Reggio Emilia is a good spot from which to explore this charming, small city. It’s also well placed for a drive to La Razza, a dairy farm producing hundreds of kilos of Parmiggiano Reggiano.

The milk of 250 cows goes into daily production of the cheese, then aged for up to 36 months. La Razza welcomes visitors for tours and also hosts overnight agritourism stays in a hotel on-site. Their deli and shop is frequented by locals and also sells affordable local products like white Lambrusco and balsamic with honey.

This is definitely the place to stock up. The Parmiggiano we tasted and brought back made even the best brands sold in the UK taste like salty cardboard.

In Piacenza, at the very edge of the region, beyond Parma (which makes a good in-between stop), sits the hilltop winery, Luretta.

Generous tastings of both red and white, bubbly and non, are a relaxed and social affair, less in the style of a tutorial, and more as an aperitivo before dinner.

They are all good and offer great value. We fell in love with the Principessa, a sparkling white to rival champagne. Dine even higher up in the hills at Ristorante Al Contesse. 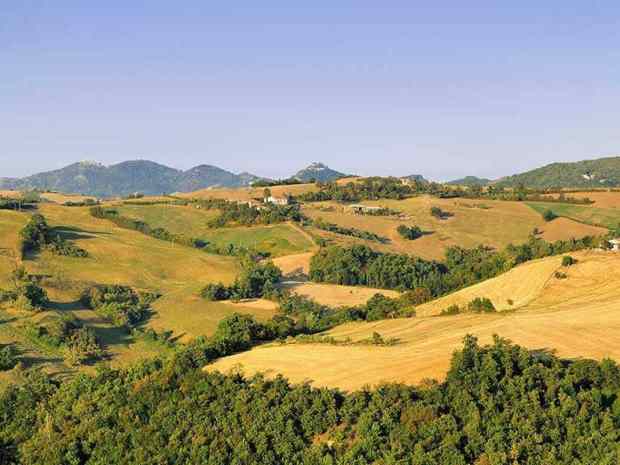 The family owned and operated restaurant has stone interiors, al fresco seating, and offers less heavy dishes, perfect after a wine tasting, and dessert under a sky full of stars.

The last leg to Milan is under 90 minutes, with options to fly out, or drop off the car and enjoy the sophistication of Italy’s second largest city. 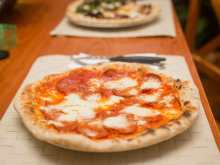 Italy on five pizzas a day 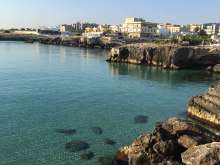 You can’t go past Puglia's Monopoli