There’s nothing like a seemingly endless supply of world-class wineries, boutique breweries, pounding surf breaks and extraordinary geological and other natural phenomena - all in one place.

Originally a chilled out surfie town, Western Australia’s Margaret River has evolved into the ultimate smorgasbord of fine wine, good food and spectacular scenery, so much so that it was recently named one of the world’s Top Ten Regions in Lonely Planet’s 2010 Best in Travel.
With its Mediterranean style climate, it is one of the world’s premium wine-producing regions and is hugely appreciated for making more than 20 per cent of the Australia’s premium wines.
Boutique beer breweries have also sprung up, offering brews ranging from traditional pale ales and pilsners, through to ginger or chocolate flavored beers. Some of Australia's best chefs produce a feast of top tucker (Australian for food) - think exquisite cheeses, jam, condiments, olives and freshwater crayfish.
From the moment Mathew Flinders first spotted Cape Leeuwin and started mapping the Australian coastline in 1801, the Margaret River region has been as culturally diverse as it has been intriguing.
Artists from around the world have long been attracted to Margaret River’s rare beauty and relaxed atmosphere, and the list of internationally and nationally acclaimed photographers, jewellers, painters, glass blowers and wood, and metal working craftsmen is endless.
Days are easily spent wandering the artisan trail - there's an art or craft gallery on just about every corner.
Mother Nature has also created her own gallery in the form of networks of underground caves, a rugged coastline, squeaky-clean sandy beaches, turquoise water, towering forests and bush and coastal walk trails.
The historic 100 year-old Cape Leeuwin Lighthouse is situated at the most south westerly tip of Australia, standing at the point where the Indian and Southern Oceans meet. In spring, the countryside comes alive with a carpet of vibrantly-coloured wildflowers. 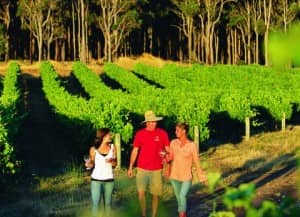 Explore the Leeuwin Naturaliste Ridge with its dramatic cliffs and rocks; the stalactite and stalagmite decorated Ngilgi and Jewel Caves; the ancient fossil remains of Mammoth Cave; and the Boranup Forest, home to pale-barked karri trees, the third tallest trees in the world.

If you’re feeling intrepid you can go rock climbing; or take the week-long walk along the Cape to Cape Track from Cape Leeuwin to Cape Naturaliste.

The powerful waves that hammer the 40 kilometres of coastline have resulted in Margaret River being named one of the world’s top ten surfing breaks.

For those a little less adventurous, many trails make for enjoyable short strolls, or you can throw in a line and catch some local snapper; go bird-watching along the meandering waterways; or improve your handicap on one of the world’s most scenic golf courses.

A colourful collection of cultures from around the world; great surf, fine food and wine and one of the largest and most naturally diverse regions in Australia - makes Margaret River an Australian icon.

Written by Kris Madden on behalf of Tourism Australia

For more information on travelling to Australia visit www.australia.com

Let’s face it, Australians both love and live to travel. Aussies love packing a bag, swag or backpack and setting off on an adventure, it’s part of the Australian free-spirited nature. Which is why COVID has been such a tough time for so many intrepid Aussie travellers. With the hope of state border restrictions easing …

My kids are scooping out a couple of strawberry and cream lollies from a jar in the foyer of Canberra’s East Hotel. Breakfast had consisted of a hearty Asian-style plate of brown rice, sprouts, avocado, beef, fried egg and chilli washed down with good coffee and freshly squeezed juices. The rest of the family followed …

Sit at the bar listening to a mix of old school Motown, Janet Jackson and Bon Jovi in Adelaide’s Peel Street restaurant and you’re transported into your own Brat Pack film. The stripped back warehouse interior design features a long bar of timber and concrete and old-school air-conditioning ducts criss-crossing the ceiling. Add a small …

Best tarts in Adelaide, bar none

It’s 7am on a warm summer morning in Adelaide and I’ve just had the best Portuguese custard tart I’ve ever tasted. Freshly baked in a wood-fired oven, the sweet delicate puff pastry is filled with a light custard and the residual sugars are toasted black and perfectly caramelised on the outside. Standing at his street …

Nothing raises my spirits more after the hectic highs and exhaustion induced lows of the working week than a rambunctious brunch session with friends of mine, in Melbourne’s inner city suburbs. Awakened with a weekend vigour I set out on a short stroll through the narrow streets of Richmond. Armed with a whole host of …