More oasis than hotel, the Kerry in the heart of Pudong in Shanghai has set a benchmark for other hotels to follow – in service, technology, cuisine and beer.

I say beer not because I have a one track mind and it’s about all I think about … beer …. beer, beer, beer, chili – oops I digress. No, I sa 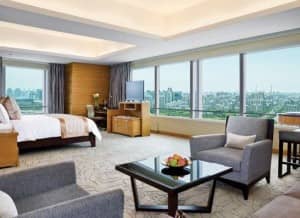 y the b-word because it has a $2 million state-of-the-art Australian designed and built micro-brewery towering three stories high in its own glass cage over the bar, coincidentally called The Brew.

The Kerry is run with all the calm and charm (which seems to be the national trait of all Hawaiians) by Ed Brea, who hails from the Sandwich Isles via another Crown colony – Australia.

From its complimentary WiFi, which works flawlessly throughout and around the hotel, to its restaurants, beer gardens and courtyards, the Kerry has transformed Pudong.

The Kerry is the first of a new luxury hotel brand from the Shangri-La group and hopefully the luxury behemoth will use the Pudong Kerry and Mr Brea’s impeccable management as the template for all future iterations of the brand.

All the rooms have sit down bars so you can entertain (or debrief or visit) without having to perch on the bed or lean against a wall and – are you sitting down – free amber fluid or (let’s say it out loud) beer (and soda) in the mini bar.

It’s a few seconds walk to the Shanghai New International Expo Centre, it overlooks the green lungs of Shanghai – the expansive Century Park, and is integrated with the Kerry Parkside shopping mall and office tower.

Strategically positioned next to the Maglev (all of five minutes from Pudong International Airport,  you can also reach the subway without having to surface, which then links you with all of greater Shanghai for a few pennies.

“The idea is you have more than a hotel,’’ Mr Brea tells Lunch Magazine.

“It’s a lifestyle flagship attached to a shopping mall, office building and residence.

“Inside the (hotel) envelope one of the uni

que things we have is our own F&B concept, The Cook, The Meet and The Brew. We also have a very nice steak restaurant upstairs.

“It’s a good place to come and enjoy and have a pretty good hand-crafted beer as well.”  I agree if you substitute Mr Brea’s laconic “pretty good” for awesome.

Mr Brea says he is not sure if the Kerry qualifies as boutique.

“At 570 rooms and 180 residences.  We are maybe boutique with critical mass.”

As for the location, Brea says nearby Century Park is about the size of Central Park and one of the largest green spaces in Shanghai.

“Pudong is a great hub for jumping off and seeing the rest of Shanghai. We have just got that little bit of everything. It’s a nice balance of having a place where you can not only do some serious business but you can also have a lot of fun while you’re here.

“Whether it’s in the Brew, Kerry Sports, going shopping or just hanging out.”

He says oasis is a good way to describe the Kerry.

Mr Brea says the very strong emphasis on F&B has “been quite successful” for us.

And will the indoor onsite brewery concept with FREE BEER (in capitals because I’m basically Homer Simpson) on arrival catch on?

“I wouldn’t rule out other breweries. It’s a great concept.”