Iceland’s design community is considered to be in its infancy compared to its sophisticated Scandinavian neighbours.  It only established a design academy ten years ago, but an unlikely event has helped propel it.  In a classic case of unintended consequences, Iceland’s financial crisis created an appetite for locally produced and designed goods.  Reykjavik’s annual event, Design March, showcases Iceland’s home-grown designers.

I recently took a tour of the city’s design scene with Greipur Gustafsson, festival director of Design March.

“We’re heading from the downtown area to the Fish packing area.  It’s quite a short walk since the downtown area is pretty much situated around the harbour in Reykjavik.  The Fish packing area is pretty much what is sounds, where the fish industry is located.  We know the meat packing districts somewhere, so this is what we have, a fish packing district that has been moving and therefore designers or creative industries, even there are some music studios as well, have been settling in.  What has been convenient is how close it is to downtown because this is where everybody wants to be, or be near to.”

We pass a fish warehouse and Greiupur explains it’s no longer for seafood.

“During our festival, Design March, designers have been moving into empty slots, empty warehouses, and shops even, to exhibit because they maybe have their workshops at home, so they want to exhibit somewhere people can see it.  For example, during the first Design March during 2009, that was just a few months after the financial crash in Iceland.  The Christmas shopping was over, lots of shops in the main street had closed down, so designers filled up every space in the main shopping street with all kinds of design and that had been kind of the spirit since.  People have been trying to find huge houses to put up exhibitions, which is really nice.” 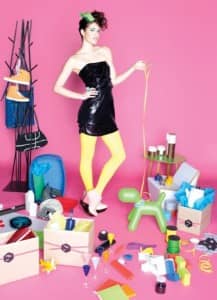 Just opposite the harbour, we come upon a former fishing net factory, now home to a design collective, including some of the most prominent designers in Iceland.   We talk about the difficulty of living in the shadow of Scandinavia’s well-established design community.

“I think almost everyone would say, ten years ago, the design department of the Academia of the Arts responded.   That was a huge page-turner for the design community of Iceland.  Until then, people had to move outside of Iceland to do design.  So until then, there wasn’t really a community because when people moved back, no one knew each other.  That has changed.  Then, four years ago, designers in Iceland funded the Iceland Design Centre, and that brought together designers from all the different fields, all the way from fashion to architects.  That made a community that wasn’t before.  So there has been a design boom over the last ten years in Iceland.”

Icelandic design became fashionable during one of the most unlikely times in the nation’s history, Greipur explains.

“Now, the brand of Icelandic design is noticed as being something good in Iceland where maybe it wasn’t before.  During our crisis, in late 2008, everything that was Icelandic became a little bit more sought after because the nation became aware of how necessary it was to try to keep aspects of the work in the country and not move the currency.  So Icelandic design, Icelandic craft, Icelandic food, sort of became hip.  It became “in” to buy Icelandic.   Lots of stores closed down in downtown Reykjavik, which helped us doing the Design March since we could fill up the stores with design, like as pop-up galleries.  People lost their jobs, and had more time to design.  There were architects and others who lost their jobs and now could work on their things being a little more creative.”

Arny Porarinsdottir is an architect and designer at the collective who is hoping to benefit from Greiupur’s work and this year’s Design March.   We talk about what it’s like being a designer in such a young design community.

“There are very good things to be a designer in Reykjavik.  You have this small network and you have easy ways to connect to people because the country is really small.  But there are also not so good sides of it.  We have not so many opportunities.  We have small manufacturers, that’s the downside of it.”

Arny learned design in Denmark and returned home just before the crash.

“It was really hard, but at the same time, the community and people were really open for Icelandic design, manufactured here.  Right after the crisis everybody was like, ‘now we have to stand together, buy Icelandic.’  Even if they didn’t have the money, they had the interest.”

“We have a really short history compared to Denmark.  Young people are really into buying old Danish furniture and we don’t have that here, but we have these new fresh things and designers are really ready to do almost anything to promote themselves.  We are not even teenagers compared to grown up design communities but of course we have to be optimistic.  We see lots of opportunities.”

“The Icelandic Design Centre opened its travelling exhibition in Helsinki this December and the Managing Director there said to us, ‘Iceland’s designers have been really taking a place on the Scandinavian design scene,’ and I think that’s what we are aiming for, that we want to be talked about in the same sentence, or at the same time as Scandinavian design.  We don’t have any huge names in Iceland, but we are working on that.”

With a little luck, and the spirit of the financial crisis, Arny Porarinsdottir could be one of them.