IMAGINE you are walking down a white sandy creek bed that could have been laid down three days, three weeks, or 300 million years ago.

On either side pine trees tower over you hundreds of feet into the impossibly blue sky. The sun is on your back, the air is hot and there is a hint of spice in the fecund tropical air and a hushed feeling of great things about to come to pass. The creek bed opens up to a sparkling lagoon its blue stillness perfectly mirroring the heavens above you and the pines that surround it.

You look at your life partner, smile, disrobe and plunge into its cool waters, so clear they are invisible, vouchsafing you a clear view of the corals, rocks and fishes in its cooling depths.

Welcome to the Ill des pins, the Isle of Pines, New Caledonia.

The sun is on your back, the air is hot and there is a hint of spice in the fecund tropical air and a hushed feeling of great things about to come to pass.

A former home to French convicts, and now the home of a La Meridien and a host of smaller hotels and bungalows.

It also plays host to one of the most unique restaurants I’ve been to on the globe, Kou Gny overlooking Oro Bay.

The chef at Kou-Gny works over an open barbecue. He uses a brush to paint a buerre blanc sauce onto the halved lobsters. The crustaceans waiting to go on the grill lie on a timber plank, their reddish brown shells so beautiful and their flesh so fresh they must have come from the sea a few minutes ago at most.

After chatting to the chef I return to our simple table out on the sand under the palm trees. Smiling barefoot children bring us drinks, a cool resiny French white, the inevitable ice bucket of cold beers – for thirst is a dangerous thing in the tropics. We sit opposite each other and touch glasses. It is one of those moments.

After luncheon it’s time to walk to the aforementioned lagoon with the invisible waters.

I draw a curtain of silence over what happened in and by the waters, suffice it to say the fishes and corals did not appear to mind.

In a geological sense we were never even there. Perhaps the pines noticed our ephemeral forms and got on with whispering to each other in an ancient South Pacific tongue by the still waters.

Back in Noumea and it’s time to check out the nightlife. The nightclub is only a short walk from Le Meridien and is absolutely jumping. Bodega Del Mar is its name and it’s on a pier overlooking Noumea’s lagoon, Anse Vata Bay.

The crowd is youngish, but with a smattering of all ages, and the mood is ridiculously happy. Everyone is out to have a good time.
More than half the crowd is female and gorgeous.

I push my way through the crowd using my smattering of French to say excuse me and no worries, getting one or two smiles from the dancers.

At the bar, my mind wanders and I don’t realise it’s my turn.
The barman grabs my hand “pardonez moi monsieur’’, he says gently.

The rest of the queue looks at me expectantly – I’m holding up proceedings –  but no one looks like they are about to slip a knife in my ribs, which is what would happen back home if I’d kept truculent nightclub denizens waiting more than a fraction of a second.

I order in English and he replies in the same language and finishes with an “enjoy your stay’’. 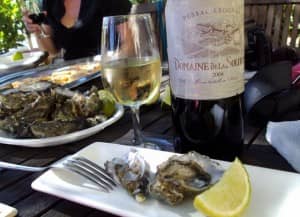 We dance with the locals. I dance with one girl in particular, a young student from Paris. Her boyfriend looks on, unruffled – again cause for gunplay (at the very least) in my hometown.

By the standards of other Pacific conurbations, Noumea is a gleaming metropolis with infrastructure that works, great inexpensive restaurants, and sparkling clean cabs.

Where at sundown other South Pacific towns ring down the steel shutters, in Noumea the locals take a stroll along the beachfront and say “bonsoir’’ to each other a lot.

I stayed at Le Meridien, which was fantastic and had great restaurants, including Hippocampe and spent a goodly part of the evening in the attached casino with my good friend celebrity chef and New Caledonia’s gourmet ambassador Gabriel Gate.

It is also possible to pick up a bottle of sancerre in the local supermarket for a fraction of what such a superb French wine would cost anywhere else, except possibly France.

Then grab a baguette, some foie gras, some local oysters and a few limes and have a simple meal out on the deck of your room.
Follow this with by a dip in the hotel’s enormous pool, which is itself right on the beach.

Make sure you take a lot of photos of yourself by the pool having a sancerre with your life partner, but don’t cheapen the memory by putting it on your Facebook page.

When it’s time to go and you’re at the airport, if you’re a fan of cognac, don’t wait until you get back home to buy your brandy. You can pick up a bottle of good brandy for under $20.

Enough of these mundane financial grubby details, I hear  you say.
Very well, for the next to last word, I speak to Gabriel: “It is the French experience in the Pacific, without French prices.’’

And part of me will always be by that lagoon under those trees on the island of the whispering pines.

Aircalin operates one of the youngest fleets in the South Pacific