ear-old chef is at the heart of a new restaurant trend in Paris, which flies in the face of classic French tradition. There are few ingredients, no menus, and the dress code is come as you are.

“I called the chef and he can have a table for you at 10 o’clock, yeah, it’s possible. Can I confirm this table? With pleasure sir, bye-bye.”

That’s a recent call from one of the hottest new restaurants in Paris…only it wasn’t the Maitre’d.  It was chef, and owner of Agape Substance, David Toutain.  He’s 30 years old and turning heads for his cuisine, and his class. He’s probably the only chef who helps guests snag tables at competing restaurants, and calls them to deliver the news.  Toutain was calling in a favour for a customer who drooled over his cooking at lunchtime, and was desperate to try another trendy restaurant that night.  Toutain was only too happy to help. 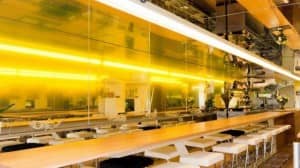 “You realise that this defies the stereotypical image we have of the arrogant French chefs? “ I ask him.  “You know this is exactly, ok great, thank you so much.  I think it’s very important to work together.  It’s not war; it’s just pleasure of food. When I called I think about that, and I say, why I don’t ask Alejandro to do that. I was very happy and you know, sometimes you just need very good energy and this is very good energy.”

But David Toutain hardly needs good energy.  His restaurant has been open just four months, and it’s been full every single night.  Yet it hasn’t gone to his head.

He is, without doubt, both of those things.  Agape Substance is part of a new trend in Paris restaurants where the produce inspires the menu, rather than the chef.   But David takes things a few steps further.

Guests are presented with a board listing 12 ingredients.  They advise which ones they can’t, or won’t eat and the rest is up to David and his team.

In a small, rectangular room, people perch on bar stools along a narrow, communal table which extends into the kitchen, to become the workspace, creating a seamless transition from dining room to open kitchen.   Mirrored ceilings aren’t meant to be kinky; they’re also devised to connect diners to the kitchen.

After spending time honing his culinary skills in New York and Spain, David decided to return to France to raise his young son, and introduce the French to a style of cooking based on his favourite restaurant, a working farm and eatery in Westchester County New York. He lets his purveyors guide the daily list of ingredients based on what’s fresh. Items range from seemingly bland brussel sprouts, which are anything but…to lemon verbena foam served in sea urchin, or a purple carrot which only needs a gentle touch of the fork to slice through.

Agape Substance, not surprisingly, attracts a big foodie fan base.  Sarah Canet is among them: “Today we’ve had an extraordinary meal and it’s not that comfortable here!  We’re packed in, elbow to elbow; the waiters are pushing past you to get to the other people.  It’s noisy, there are lots of intense smells, but it’s exciting, isn’t it?”

It is exciting.  A slight lull in conversation, and one only needs to look up to see David and his team artfully assembling the next dish.

Investors think Agape substance is exciting, too.  I hint that perhaps David will be wooed to expand, but the humble chef is keeping his cool and refuses to plan too far ahead.

“I plan to make service for 24 guests tonight.  This is my plan.  We need to be very focussed, but we need to enjoy this moment too, you know.” 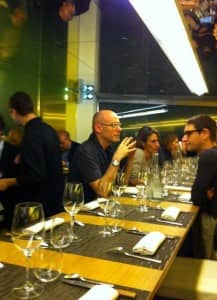 And I enjoyed the moment, too.  16 small courses later, with wine paired to match, I was converted to David’s fresh, no-menu approach.