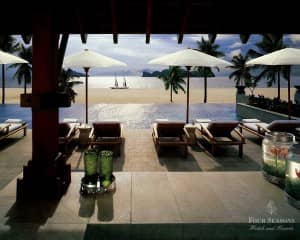 In the Monty Python film, Life of Brian, the three wise men pay a visit to the newly born Brian in the stable and offer the gold, frankincense and myrrh. Brian’s mother wonderfully played by Terry Jones happily accepts the first two but suggests they might leave the myrrh at home next time they drop by. I can’t help think of Monty Python as I lay in one of the spa pavilions at the glorious Four Seasons Resort in Langkawi.

I’m just settling in for an Asian Fusion massage which combines Thai, Malay, Chinese and Indian healing techniques into an extraordinarily pleasant 90 minute treatment. The masseuse has asked me to choose the oil of my choice and I go for the Om oil combining sandalwood, frankincense, cedarwood, myrrh, patchouli and benzoin. Sandalwood is one of my favourite fragrances and it seems to gently waft through every room I enter in the resort. The others all sound soothing enough. As for the myrrh, I’m with Brian’s mum but I’m not complaining.

The Asian Fusion massage is my second treatment for the day and I’m in dire need of its rejuvenating pleasures. Reason being is I’m addicted and probably more importantly, I fell asleep in a chair the previous evening outside. My spa experience had kicked-off earlier in the day with foot reflex massage where the toxins were supposedly coaxed from my body with the aid of a soothing spearmint lotion. It worked a treat but more was needed.

On arrival at the resort the night before, a few (maybe five or six) mojitos were consumed as I watched an English couple get married on the beach. The sand was strewn with frangipani and bougainvillea petals. An orange sun ducked down slowly behind the limestone precipices of the island directly in front of the resort and its colour reflected brilliantly off the Andaman Sea. Swinging gently on a Moghul chair in the resort’s open air Rhu Bar and with a day’s travel behind me, I had fallen into a rather contented slumber.

Everything seemed so relaxed; even the waves seemed to labour in their efforts to flop onto the shore. When the staff woke me, I waved them away and assured them that I would not linger too long after they closed in the early morning.

At around 2am a proper bed beckoned. In the room, a number of turndown treats sat near the bed: sticky rice rolls, white pearls of sago topped with a coconut palm sugar sauce and black sesame pandan rolls were a mouth-watering late night treat. 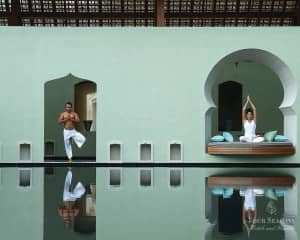 While the room housed in a pavilion of four is one of the resort’s smallest, it’s a sybarite’s dream. A high-ceilinged bedroom leads to a Spanish marble bathroom of stadium proportions, which in turn leads to a secluded tropical courtyard with plunge pool and pavilion. Outside the seclusion of the room and the courtyard lies a daybed overlooking the sea and the gardens.

The resort itself sprawls over 11ha of gardens, which are tended by around 86 gardeners. It’s hemmed by 5m walls of rock, limestone cliffs and the sea in front. Architecturally, the resort’s stylistic influences are striking as it melds the diverse palette of traditional Malay kampung with the majestic Islamic design of The Alhambra in Granada seamlessly.

Back when the resort opened in 2006 it was hailed as the best in the world by the prestigious Robb Report and continues to receive plaudits from around the globe. Moreover, the spa is also consistently ranked among the world’s best.

This is why I find myself lying in one of the spa pavilions with its open-air bathroom and tranquil pond outside for the second time in less than 12 hours. The final treatment for the day will prepare me for the coming evening’s perambulations. I’m heading out with the resort’s naturalist, Aidi, to sample pleasures further afield.
Actually we don’t go far. We venture to a place called Bon Ton about 30 minutes away. It’s the dream made real of an Australian woman called Narelle McMurtrie who has created a boutique resort of disarming charm.

Bon Ton doesn’t sit on a beach as it lies beside an idyllic water lily covered lagoon but it does have a serene lap pool within its grounds. The real head-turner though is the accommodation. Eight rebuilt traditional Malay Kampung houses on stilts with wooden floors and filled with gorgeous antique furniture. Each house offers its own unique charm such as a four-poster bed or smooth wooden bath.

Aidi and I sit in the resort’s postage-stamp sized bar Chin Chin and sip cocktails while sampling a tasting plate of Nyonya cuisine from the open-air Nam Restaurant – acknowledged as one of Langkawi’s finest. He tells me about our plans for the next day, which include an early start as we intend going on a mangrove tour.

Not being a fan of mangroves, which in the past I’ve thought of as merely trumped-up swamps, I’m not completely enamoured with the idea.

The next morning a whole bunch of excuses fill the brain including food poisoning and that I’m allergic to green things in water. Luckily none of them were used.

Aidi has a deep knowledge of the mangroves and a passion for their conservation. Sitting in the vast Kilim Nature Reserve, the mangroves play an integral role in the whole island’s ecosystem. There’s around 500 species of mangrove and according to Aidi, all of the fish in the surrounding seas were spawned in the mangroves.

We chug along impossibly verdant tunnels of green in a little aluminium runabout and spy macaques and all manner of birdlife including sea eagles and hawks feeding. At one point, our driver lashes the boat to a branch and we stop for a luncheon feast of coronation chicken salad, herb crusted seared tuna, camembert cheese and an exquisitely rich cheesecake doused in a refreshing berry coulis. All this was washed down with ice-cold water! There was a need for a crisp white wine or even champagne but I wasn’t in the mood to quibble.

After lunch we headed out into wider channels past yachts straining on their moorings like contented Labradors on a leash and pulled alongside a floating fish farm. A collection of netted enclosures in a saltwater channel, the farm housed grouper, barracuda and a huge manta ray among its selection of water-dwelling denizens.

As we returned at pace across the Andaman Sea to the beach at the Four Seasons, Aidi recounted stories of pirates and poachers from the not-too distant past. He pointed at the island directly in front of the resort as a former refuge for pirates.

That night over dinner in the resort’s scrumptious Ikan Ikan restaurant, Aidi mentioned that on the other side of the island across the water’s towering limestone façade was a sheltered bay and pristine beach which was easily reached by kayak. This was to be my next day’s adventure. 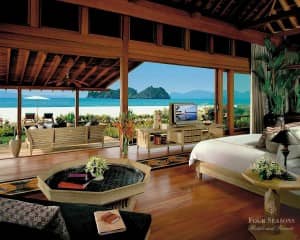 Early the next morning, the paddle alternately slapping and scything through the water was the only thing breaking the surface of what looked like a huge grey-blue sheet of the finest fabric. As I approached the island the cliffs were more pockmarked than they appeared from the resort’s beach.

At their base caves and grottoes begged to be explored but the secluded bay on the other side was my chosen destination. As I rounded the edge of the cliff face, Aidi’s description seemed to undersell the bay. Palm trees and melaleucas covered in vines spilled down from the top of the island into a bay rimmed by a thin ribbon of sand. I pushed my kayak up onto the beach and spied monkeys spying straight back at me. A lean-to of timber and other flotsam sat against a rock about 50m away. This was pure Robinson Crusoe although no-one seemed to be at home. I immediately felt like I was standing in the middle of a stranger’s loungeroom and went back to the kayak.

As I glided across the water back toward the resort in the early morning sun, a fishing boat putt-putted past around 100m away and I sincerely lamented the fact this wasn’t home.

Getting there:
Malaysia Airlines fly direct to Kuala Lumpur with connecting flights to Langkawi from most Australian capital cities. Visit www.malaysiaairlines.com for more information or call 132 627