A recent protest in Manama’s old soukh was almost stopped before it even started.  Police in riot gear patrolled the streets, outnumbering protesters, waiting to chant in the streets.  Their intimidating presence was meant to deter anyone who dared exercise their freedom of expression.  After the police passed, a group of 20 Bahrainis marched peacefully, and quickly through the streets, only to be met again, by officers spraying a blinding chemical.

Ibrahim Khalil al Shakhoori is one of the protesters.  I ask him what he, and the others, are hoping to achieve.  “Democracy.  It’s very simple.  When we say democracy, it means that we will have the right to express our opinion.  It means every single official will be accountable for mistakes done.  Meanwhile, opposition, or anyone else, they must respect the law.  As simple as that.”

I was granted an interview with the former Chief of Miami’s Police Department and after a 20 minute ride from downtown Manama, I arrive at the security checkpoint of the Ministry of Interior.  They’re expecting me, and wave my taxi driver through.  Too bad we have no idea which one of the bright, white buildings to enter.  Fortunately, a broad man in a traditional dish-dash and ghutra (headwear) whisks me into his air conditioned white sedan to drive me 500 feet or so through a gate leading to an inner sanctum, protected by armed men in uniform.  We park right in front and I’m led upstairs to greet one or two more people who seem to know exactly who I am and why I’m here, before I’m introduced to John Timoney, waiting in his office.  We sit down on large sofas in a room so cavernous there’s nearly an echo with every word.  I begin by asking him about the goals and timelines for Bahrain’s Police Department.

“The short term goals are coming up with a police code of conduct, but it’s not just having a code of conduct, but now we’ve got to train to that.  We’re looking at the way demonstrations are handled and how they are processed.  Part and parcel of all this is the training piece.  You can’t do this overnight.  Policies develop but then you’ve got to put it into play so everybody understands it’s a new day.  We’re going to try to change the culture.  These things take awhile.”

Other recommendations include creating an Ombudsman, similar to the NYPD’s Internal Affairs unit.  But while John Timoney and his team draw up new policies, opposition members like Ibrahim claim at least 20 more protesters have been killed by security forces since the recommendations came out just three months ago.

Ibrahim says the goal has always been for change to happen peacefully.  “People have been insisting on remaining peaceful but when your voice is not being heard, it now became inevitable to turn violent for some.  The majority remain peaceful.”

But the police force hasn’t remained peaceful.  John Timoney is proud of his record of 40 years in policing and having never used tear gas, so I ask him about the continued use of it by Bahrain’s police.  “One of the issues here, we see the videos, where the police officers, literarally, on a regular basis, are being assaulted with Molotov cocktails.  So it looks like the tear gas is being used as a dispersal method.  There is no perfect solution to this.  We’re going to look at all the options. I spent forty years in America.  I said I never used tear gas, never.  I was also never subjected to a Molotov cocktail.  Under no circumstances should the opposition be condoning the violence, or by their silence, even appear to be condoning it.”

I ask Ibrahim about the Molotov cocktails.   “Condemned.  With capital letters.  Violence in any form, whether Molotov cocktails or Kalashnikovs or suicidal bombs is condemned.  Such things undermine our cause, but it would be unfair to read them out of context.  If you keep suppressing people for a year or so, violence is a natural consequence, yet we keep condemning the violence.”

John Timoney agrees members of the opposition DO have a right to protest.   “Absolutely, that’s a universal right.  Having said that, there are certain rules and regulations that go into a protest.  You couldn’t go out into the main thoroughfare and just decide to block up traffic.  What needs to happen here though, there needs to be a negotiation.”

There was a lot of hope amongst protesters that, with John Timoney’s arrival, would come a more peaceful security force.  But demonstrators claim five more people have been killed in the protests in his brief time in Bahrain.  “I don’t know if things have gotten worse, improved, or stayed the same.  I am an adviser  on how to implement reforms, short term and long term.  When you’re looking to train a police force, re-train, it’s a huge project because people still have to engage in ordinary policing.  It’s going to take the better part of a year.  Things will improve but it’s not going to happen overnight.  There’s a tremendous amount of hard feelings here.”

Hard feelings which make it difficult to get both sides to the negotiating table.

Ibrahim says there is deep mistrust of the government.  “There has been something called a national dialogue, but if you go to a dialogue and the Prime Minister is a red line, then what are you debating about?  There is no real intention, from my opinion, from the regime, to do any actual change.  They know exactly what we want.  One, they can release all the political prisoners, two, they can stop this suppression against the protesters, three, they can allow freedom of expression, freedom of speech.  It’s very simple steps which could clearly show people their good intention. 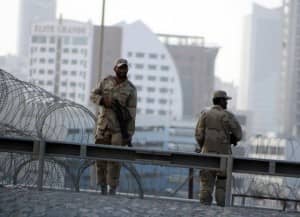 From a policing perspective, John Timoney hopes putting more of the Shiite majority in uniform will help show some of those good intentions. “We went through this in the US.  The goal in police departments is to try to get the police department, as much as possible, to reflect the community it serves.”

It might be a good start, but policing Bahrain is a rather different challenge than policing a major American city.  Here, if John Timoney and his colleagues get things right, Bahrain could be a role model for the rest of the Arab world.  Get it wrong, and the problem could spill over into the rest of the region.