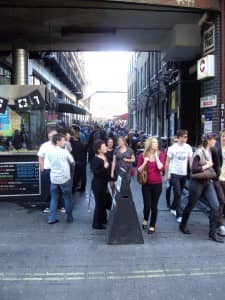 “MORE chili please,’’ I say gulping a pint of ale.

The manager looks at me, crestfallen and trudges off disconsolately to the kitchen.

I’m at the Preem Restaurant in Brick Lane London, so called because it (the lane, not the restaurant) is paved in phyllosilicate minerals; I mean blocks of baked clay they use to build houses.

I’m about to get on a plane to Hong Kong, so what better way to spend my last few hours in London than by drinking way too much and eating the spiciest food imaginable.

Earlier I had enjoyed a few lagers with my new friends at the Pride of Spitalfield sitting in a beer garden out the front and talking about the undoubted skills of a feetball player called Tim Cahill.

One of my new friends Scouse told me to dine at the Eastern Eye but when I got there (about 100m up the road) it was empty, although open.

Nothing gives me the joes more than being the only person in a restaurant with every bastard hanging over you and watching every mouthful, so I kept walking and headed north up Brick Lane until I found Preem.

It looked very inviting with its tasteful white exterior and French windows and plenty of locals getting over the night before as well as lots of tourists and families.

I opened negotiations with the manager and asked for the hottest thing on the menu.

“The beef vindaloo? OK make it as hot as possible with plenty of extra chili and more chili on the side please, and two pints of lager,’’ I say.

I hear them giggling in the open kitchen and I know they are really giving it the works.

The laughter reaches a crescendo and I can imagine them fishing at the dishes with those tongs they use in nuclear power piles to handle “hot’’ material before putting it in lead lined cases and burying them in salt mines.

The vindaloo arrives along with a prawn balti and some extra pickles.

I begin to regret the extra chili I’ve piled on.

But as my Old Man says if someone asks a Porter if something’s too hot, you automatically ask for extra chili.

it’s time to collect my things and head to the Pride for a couple of final cooling ales and a cadged cigarette in the beer garden.

It’s an excellent authentic London feed, but go easy on the chili of you’re about to get on a 10-hour flight, even if it is in Virgin Upper Class.