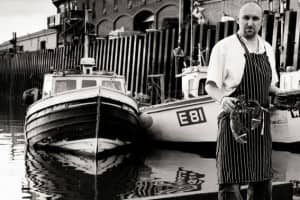 It took 300 years to build York Minster and it was worth every moment.

I can take pride that an ancestor, Robert Vavasour, provided the stone from his quarry from nearby Tadcaster for the cathedral. For this he has his statue on the left side over the Minster’s west door.

It’s always a good idea to have the right connections when it comes to cathedrals.

Right by the Minster is a street of York known as the Shambles, once the home of many butchers.

The area is wonderfully medieval. As town planning goes it was non-existent.

Instead street upon street has small terraces some with over-hanging balconies. They are all hugger-mugger and a perfect tourist attraction.

Many now are shops, some quite good. But best of all and most surprising is an unprepossessing hostelry, Nineteen.

Hidden away down unpromising Grape Lane.

This 15th century dwelling has now what is termed a tapas bar – but with English tapas, small helpings of mushrooms and ham pie.

The soup was asparagus. There was salad. The small helpings added up to a well-balanced meal.

Nineteen is possibly York’s oldest restaurant, as records show this very building has been used since the fifteenth century.

19 Grape Lane has seen a variety of businesses throughout the last five hundred years, most recently as a restaurant since the 1970s, before that as a residential home, a wholesale fruit merchants and in the 1850s it was a coaching inn known as the Bloomsbury Inn, not to mention its past as a house of ill repute.

In the Victorian era Grape Lane was actually named Grope Lane in reference to the many brothels that brought the red light to the street.

It can cater for 40 diners on two floors. This ‘olde worlde’ brought up to date providing just the sustaining repast before embarking down Swinegate to York Minster.