High above London’s shopping mecca, Regent Street, sits Senkai, the new restaurant which has emerged from Cocoon (the former restaurant at the same site).

I remember going to Cocoon just about nine months ago and thinking it was a great spot; well-located with a good bar, and a great menu.  I wondered why it wasn’t busier, and figured it couldn’t have been down to the plexiglass tables with plastic flowers inside.  They were kitschy, sure, but not bad enough to put me off a place which served great Asian dishes.

The bathrooms being two floors down were a bit of a nuisance, though. 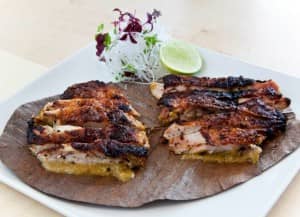 The good news is, the owners clearly agreed with me.  Gone are the old tables, replaced by simple, blonde wood ones which suit the Japanese, minimalist style of Senkai.  And they’ve invested in plumbing upstairs.  In fact, the loos are worth a visit, with waterfall faucets that spill onto teak timber.

We sit down early-ish for a Saturday night, it’s not yet 8pm, but half the restaurant is full.  We’re curious to see whether Senkai’s going to be a strictly pre/post-theatre crowd, or whether it’s got enough mojo to pull all night … and as we wile away the hours, it’s clear if Senkai were the single guy at the bar, he’d be surrounded by pretty, young things.

The dining room gets busier and busier as the night rolls on, which could explain the spotty service (tho’ I’m afraid that began before things heated up.)

But if you’re in good company, which I am, the food and conversation provide enough distraction.  It’s been a popular trend in London, for Asian restaurants to copy big name chefs at Nobu, Zuma and the like, ripping off recipes a 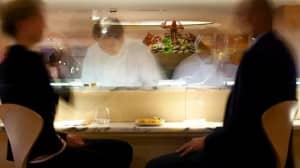 nd Senkai does have a few that are stolen, but who cares when they taste so good?

But be warned, this is not a restaurant for bland food-lovers.  Chili is the theme of our evening.  Tuna sashimi arrives with wasabi chutney, which is a creative take on a typical condiment.

The menu’s got plenty of sushi, tempura, dumplings and tataki’s but we veer towards the robata skewers. Char-grilled squid topped with a chilli sauce are a favourite, as are scallops with yuzu and brown butter.  For the “large plates” we choose the chicken with miso and coriander, which is a generous portion of incredibly moist, grilled meat sitting in a delicious paste atop a banana leaf.  But the real star of the evening is the half lobster, with; you guessed it, chilli butter.

All we can say is “wow.”  Lobster in the shell, with only a pair of chopsticks with which to eat can be an intimidating, and frustrating prospect, but the kind-hearted chef (or one of his minions) has carefully removed the precious morsels, only to place them back in the shell making our task child’s play.  I’m afraid it’s so easy, we shamelessly order another.

It more than makes up for the aubergine with white miso which is oh, so salty I’ll drink like a fish if I have more than one bite.  But while I’m all for loading up on veggies, there’s really little point when the seafood is so good.

There’s hardly room for dessert, but all night long, we’ve been curious about a small, rectangular block of ice with three oval scoops of mocha, in white, pink and green which has been set down at tables all around us.  Turns out, it’s vanilla, sour cherry sake and green tea flavoured mocha served with a dark chocolate cake with a soft centre.  If you order just one thing for dessert, make sure it’s a bowl of the cherry sake mocha – the taste is unusual, refreshing and light. 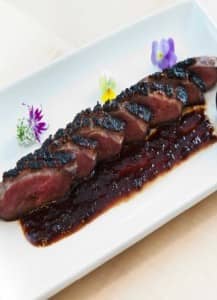 The vibe is still going strong at Senkai when we take our leave.  We’re delighted to see this place has shed its cocoon and found its groove as a hip bar and buzzy restaurant which has an equal measure of substance and style.  With the only serious neighbourhood competition in nearby Soho, Senkai should be well placed for success.