I walk into this narrow restaurant from the noise of trendy Victoria Street Darlinghurst with a feeling of trepidation that rapidly disappears.

Italian in Sydney is something of a lottery. The last place I went to … well, never mind – on with the review!

There is a long, long marble table in front of me, that leads to a sun-dappled courtyard where I’m seated at one of about a half dozen tables and await my dining companion.

The waiter admits to having looked after me many times before  – at Sydney’s The Winery by Gazebo – but that’s a review for another time.

He (the ex-Gazebo waiter I mean) is still smiling which suggests I have not completely barred myself on my previous appearances.

While waiting for my luncheon companion I order my customary Menabrea before my late-running companion takes charge – ordering a bottle of plonk, 2003 Salice Salentino Riserva Sine Nomine Negroamaro Malvasia Nera Torrevento from Puglia Southern Italy, a region in which they have been growing grapes  since time immemorial.

The antithesis of new world plonk, it’s a robust bugger full of fruit with a rich tannic mouth feel, probably not too different from the AD55 variety the same folks sold to Roman legionnaires who passed through that way.

We tell chef-owner Eugenio Maiale to feed us whatever he’s in the mood to, and it proves to be a good move. 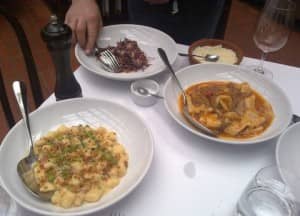 I like the thought of quail wrapped in this uber-bacon. Every time I have speck I think I should have a bit more. Mostly I just fry it in olive oil and throw it into my spaghetti sauce and German potato salad.

Done with our excellent starters and our appetites suitably whetted we move on to half-moon shaped pasta filled with wild mushrooms, parsnip chips, oregano and a (delightfully nutty) butter sauce. It’s paired with hand-cut pappardelle pasta melded into a slow braised goat ragout in red wine, marjoram and peppers. The final mouth-filling carbo hit are delicate house made potato gnocchi with cauliflower, prosciutto, peas as well as pangrattato with an insalate of red cabbage, walnuts, dolce latte gorgonzola, raisins and  balsamic.

Mildly hungover, I can feel the pappardelle and ragout turning into blood, muscle and sinew.

A Tavola is an instant favourite for lunch (and for Lunch) and well worth a visit.

The inspiration behind A Tavola – literally meaning “to the table” – derives from Eugenio Maiale’s upbringing. As a child, Maiale would play in the backyard of his Adelaide home while his parents slaved away in the kitchen, yelling out “A Tavola” when dinner was ready. On the kitchen table were consistently simple, honest and traditional dishes.

Best described as predominantly influenced by Eugenio’s “Abruzzese”  heritage – a region in Italy recognised for its simple, wholesome naturally full-flavoured cuisine – A Tavola’s menu has a heavy emphasis on Eugenio’s dried and fresh hand crafted pasta, made the way his mother taught him.

Simon Thomsen, a writer for an Australian provincial daily, described  A Tavola as “one of the loveliest, sexiest Italian eateries’’ in the city, and it’s hard to argue.

The success of A Tavola led to Maiale in 2009 opening his next enterprise, the restaurant and wine bar, Omerta. It follows the same philosophy of simple, rustic fare and has received numerous local plaudits under the leadership of Eugenio.

Maiale says: “With most Italian families, the best memories in life are all based around their table – with great food, great wine and a warm, convivial atmosphere. With A Tavola, I welcome you into our home to eat at our table to create memories like these of your own.” 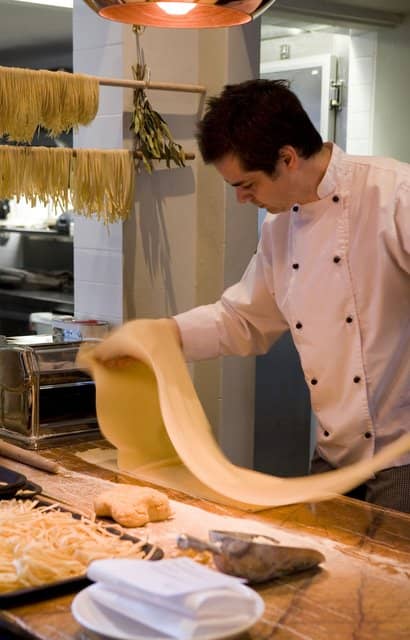