Whether on holiday, or in town for a few days for business, and you want to know where to hang out when your sightseeing or wheeling and dealing is done. Here is Lunch Magazine’s carefully crafted list of the top 10 things to do in Shanghai.

It’s only minutes from the Maglev to the airport. And a tunnel links the Kerry to the rest of Shanghai in a train ride. A cab ride back after a night out should set you back no more than $10. To say the Kerry is an oasis from the frenetic pace of Shanghai would be a massive understatement. 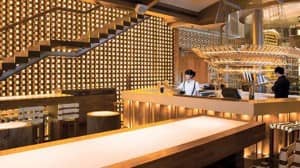 It is in Pudong, which means there is no congestion and wide streets. The Kerry has transformed this end of Pudong. It sits atop a massive shopping centre, has its own restaurants (The Cook, The Meet), its own bar (The Brew), with its own beer garden which looks on to the biggest green space in Shanghai, Century Park. It has its own gym, pool, top class restaurants and the Cook is the perfect place for brunch.

“Any questions?’’ says Thomas our host and head motorcycle rider.

“How many people have you lost this year?’’ I ask. Everyone laughs and Thomas says. “None, but there are still a few months to go.’’ Thomas is an unknown quantity at the beginning of the ride but by the end I have even more respect for him, if that’s possible. 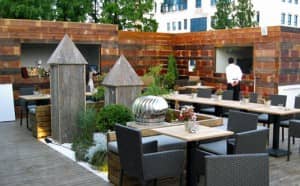 There follows over an hour on the backstreets, high streets and byways of old Shanghai on a collection of antique motorcycles.

He offers us all helmets but we all shake our heads. We go through the Former French Concession and in one spectacular move, roar on the wrong side of the road up Huai Hai Lu, one of the main drags of Shanghai. It’s not for your faint hearted, shy and retiring types. Everywhere we go we are photographed.

We also do a tour of the art district, or Yartz district as I christen it. (Don’t worry, there is a place to buy beer and give the culture a miss, so you don’t have to reach for your sidearm at the mention of the word).

The ride begins at the Peninsula, just near the Bund and ends just after dark, so you get the thrill of doing what you just did in the daytime, only with the sights, sounds and … ah yes .. even the smells of Shanghai at night around you and a throbbing machine between your thighs.
Absolutely unforgettable.

3. Cotton’s. The best burger I’ve had anyplace, and yes I’ve had ground prime rib in the States. This burger is served with cheese and salad and this and that on the side.

I bully the staff into throwing in some jalapenos to go with the chilli and extremely hot Chinese lajiao (chilli). It comes with fresh freedom fries and I fall upon it with gallon after gallon of Brooklyn Lager.

The bar/restaurant is in the courtyard of an old French mansion, with trellises, plenty of vines and lots of umbrellas and candles. The punters are mostly younger and mostly coupled up. A great place to take a date (I was there with the Old Man). Oh. Almost forgot, this review is for the one on An Ting Lu, I haven’t been to the other one yet.

4. Salute. Another Mediterranean inspired bar. This bar on Fuxing Lu is run by my very good friend Luka and his lovely Shanghainese bride. It’s only been open a few months and is one of the hottest venues in Shanghai, just off Hengshan Lu. Just by the way, in 1942 Hengshan Lu was known as Avenue Petain and the Vichy French and the Japanese were running the old French Concession. The Japanese were also running the entire lower Yangtze region and behaving rather unpleasantly.

But back to Salute. There is no wine list and no menu. Luka serves whatever he has handy after asking you what you feel like. It appears he has quite a bit laying around … the food is awesome authentic cold cuts.

My companion and I have a spicy salami and some proscuitto with some crusty bread to soak up the truly excellent Valpolicella Luka puts on our table. He only asked me one thing: ‘Please don’t give us any more publicity. I have enough customers’. Sorry mate.

5. The Apartment. I find this place by accident one night when I’m heading to Zapata’s. While stopped at a traffic light a cab overflowing with women, girls, people of the opposite gender asks us where we were heading (the girls asked, I mean, not the taxi). When we tell them they say: “Zapata’s is for amateurs, come to The Apartment.’’

Several hours and some unlikely adventures follow before we find ourselves at the designated rendezvous. The Apartment takes up an entire building and there is something to suit all tastes. On the first floor there is a club with doof doof music and a lot of chaps standing around, along with admittedly some really quite beautiful woman, being gazed at by the aforementioned chaps. Really, what fellows expect will come from gazing longingly at girls is beyond me.

We give that a miss and head on up the stairs. Another disco, with the same ratio of chaps to et cetera. With grim determination and dauntless courage, the birthright of every Australian, we decide to soldier on.

Finally the top floor. A beer garden on the roof. Snow Patrol is playing over the wireless. Clear skies and plenty of the right sort of company. The crowd is friendly (including our cab full of girls who actually do remember us - and have been joined by their grinning life partners).

The beer is cold. It’s a great place to hang or, if you’re in the mood, chill.

The bar is called Barbarossa. They have food and drink and during the day you can look at the giant lotuses in the lake. The day I’m here there's a light rain falling on the water. Upstairs there is a posh bar with a serious cocktail menu. Barbarossa is a must-see if you are in Shanghai. Look out for the lotuses - they can leap nine metres, I’m told.

Directions: It doesn’t appear to have a website. Enter People’s Park from Nanjing Lu West and keep on walking. Eventually you will hear music and when you see the lights of the old mansion, cross the bridge over the lake and there you are!

7. The Glamour Bar, M on the Bund. It has glamour, it has style, it has romance and panache. This is the place to go to be seen and to get a serious cocktail.

You cannot be overdressed in the Glamour Bar, so wear your best frock, or bag of fruit, and shine those shoes for heaven’s sake.There is a balcony for smokers or for those who just want to step outside and look down the entire length of The Bund and say, "Holy cow, how awesome is Shanghai?''

Or go inside and prop up the bar and order another martini. You’ve earned it.

I order three tallies of Heineken, some Tsing Tao and some sake to keep the beer company. The waitress asks if we want it hot or cold. ’Cold,’ I say as my sister says ‘hot’ at the same instant. Let’s get both. Ursula shrugs.

We order a lot of food. The sushi is fresh. Very fresh and so is the sashimi. The butter fried steak is very buttery and very steakey. Don’t stop ordering because you’re full. And don’t stop drinking just because you have a skinful and your belly is bulging - it’s great food and a fantastic experiment in gluttony. Let’s go there again soon Ushie.

9. Banyan Tree on the Bund. Stay here for a bit of luxury and a fresh perspective of bustling Shanghai. This brand spanking new urban resort has stylish rooms with amazing river views. But if you can, stay in the Oasis Room - it has its own private dipping pool. After a long night out, visit the hotel’s spa to reenergise and get covered in aromatic oils and healing herbs and spices.

10. Zapata’s. OK. So you knew I was going to end up here at some point. Zapata’s is a Shangahi institution. It’s got the biggest beer garden, the cheapest margaritas and plenty of eye candy for both sexes. Cheap cigarettes, inexpensive Mexican blotting paper (food).

Try not going there … go on just try. I can’t. It’s on Hengshan Lu near Dongping Lu. You can’t miss it and there’s a good bar called Sasha’s next door where you can have a quiet pizza and a cocktail when things get too rowdy and too bawdy.

Behind the bar view – Nautilus Bar, The Four Seasons Jakarta

You won't find a bar like this anywhere else in Jakarta," says Nautilus Bar manager, Marwan Ardiyansyah. Situated on the ground floor of the Four Seasons Hotel Jakarta's address at Capital Place, the bar oozes cool with its black upholstered booths and wall-spanning mural, depicting Indonesia's heady days at the centre of the global spice …

Each year tens of thousands of people visit the iconic Bondi Beach. From travelers to locals, backpackers to billionaires, families and couples alike, the beach and surrounding area are constantly buzzing. Bondi Beach is one of Sydney’s most visited beaches and there are many reasons to visit. While it’s easy to plan a day trip …

Breakfast with a view

Whether or not you’re a tourist, it’s hard not to smile when you’re walking through the city and suddenly see the tips of the beautiful white Opera House or glimpse a little troupe of adventurers climbing across the Sydney Harbour Bridge. After a few years here those sights never get old for me and I’m …

Breakfast with a view Read More »

A tale of two cities

Elmo Keep There are two prevailing popular visions of Los Angeles: the hard-partying nightlife of Hollywood, nights out on the Strip and in clubs on the West side, and the California dreaming of the canyons and beaches of Santa Monica. Both of these visions are evoked by W Hotels very different boutique takes on LA: …