Bahrain’s capital city, Manama, is a sea of shopping malls.  There’s high end, low end, and lots in between.

The hotel landscape isn’t as vast.   A handful of chain hotels dot downtown Manama, but few can boast free wi-fi and large rooms, which is where Fraser Suites excels.

Everything about this hotel, with its 90 suites and penthouse apartments, is easily accessible. The hotel is directly attached to the Seef Mall, I’m told the first in Manama, and now, sadly out-glitzed by a number of other newer malls.

But there are still plenty of boutiques and restaurants to keep one entertained for at least an afternoon or evening.  And the hotel will happily provide a shuttle service to the nearby City Centre Mall, where there’s a French hypermarket to fill the fridge.

Even if you’re not into shopping, these malls boast 20-screen cineplexes, which , frankly, I wish I had time to indulge in.  Films are shown in Arabic, Hindi, and English.

As with all hotel rooms, the key to a good one is the layout, even more so for a hotel appealling to the corporate and family market.  I’m staying in a one bedroom and it really does feel like the kind of place I’d like to live in.

I’m spoiled for choice about a work location – there’s the desk in the living room, or the fantastic L-shaped couch (my preference).  The decor is modern and stylish, with lots dimmable lights and not a single drop in the broadband line.

Apartments are fitted with microwaves, washing machines and ironing boards, if you’re so inclined.  And the Phillip Thomas Roth toiletries are worth taking.

The business centre is a del 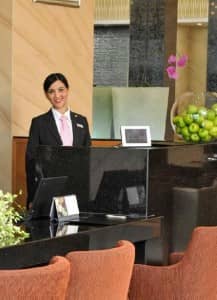 ight for its ease of use: computers, printers, and no key needed for entry.  Attached to it is a small, darkened room with a big screen TV, two Lazy-Boys and a video game console.  I’m not sure the location inside the business centre is ideal, but it’s a great feature for stir-crazy kids.

The gym is no broom closet, equipped with CV machines, weights, and even machines that do the stretching for you, which is how you know you’re in the Gulf.   And the outdoor pool is a decent size for a city hotel.

Breakfast was a buffet of Anglo-Arabic treats.  I look forward to the spicy eggs every morning, a combination of scrambled, with green chillies, tomatoes and a green vegetable similar to spinach.

Eggs are cooked to order, on request, but it’s not really necessary with all the options on offer ... there’s the classic Egyptian breakfast of foul, a mixture of beans, tomatoes and spices, and very American pancakes.

There’s a wide selection of cheeses, hummus (yes, for breakfast), and plenty of sweets - from the local nut-filled baklavas, to good old fashioned doughnuts.

Most important of all, is the helpful staff.

Of particular note is Theresa, who’s been a fantastic navigator through the local taxi system.  Anyone who’s been once knows Manama taxis rival London on price.  It generally winds up cheaper to hire a car and driver for a half or full day, but even that will tax your expense account.  Theresa has pulled out all the stops and negotiated a rate with her personal driver, a lovely Indian expat, to cart me around.   She’s even phoned me on her day off to make sure the arrangements worked out OK.

Olivier, the manager, has ferried me to the mall when no one else was around to do it, before knowing the reason for my stay. 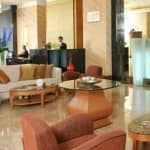 All in all, it’s been a great stay at the Seef Suites. If I’m honest, I’m thankful the Seef Mall is a mini-version of the rest in town.  It’s a perfect break from the workload, but avoids becoming a serious distraction. The Fraser may not have flash, but it’s got something even better – a low key, relaxing place to work and stay.