Just four months ago, a generic chain of mid-level Italian restaurants sat at the corner of Notting Hill Gate and Campden Hill Road.  I’m happy to report it’s been replaced with the real thing.  Valentina is an Italian deli that’s been around for more than 20 years.  It’s owned, and managed by Italians….and it shows.  The fourth in their stable, and the only one of their outlets to grace central London, this Notting Hill branch has got to be a goldmine.

Just a few steps from Portobello Road, Valentina’s corner windows provide good reason to cross the road.  Prepared foods to take home and eat cold, or re-heat, tins of imported provisions, colourful boxes of panettone, a vast wine selection including the oh-so-delicious Sicilian Planeta Chardonnay, and even Italian vegetable seeds to grow your own at home are just some of the eye candy.

The concept at Valentina is not new.  Other branded names, too big to mention, offer the all-day deli idea where you can have your morning coffee at a bar, pick up lunch or dinner, and also enjoy a proper sit-down meal.  But Valentina does it miles better.   For one thing the selection is overwhelming – in a good way.  For another, their attention to service is a stand-out.   We drooled over a spinach pie behind the glass case when we arrived.  After reviewing a menu filled with antipasti, pizza, pasta, chicken, beef, and fish dishes, we couldn’t rid ourselves of our hankering for a slice of that spinach pie.  When we asked Massimo, our waiter, about ordering from the deli counter instead of the menu, he was delighted to indulge us and gave away one of Valentina’s secrets – “The customer is king.”    I’m afraid that kind of flexibility is still rare in the UK, which means that when I encounter it, presuming the food is as good as the attitude, I know I’ve found a winner.

Everything about Valentina feels right.  The layout is brilliant.  The deli wraps around the front, forcing views of the savoury and then sweet treats, which include authentic desserts like Cannoli and Sfogliatelle.   A few steps lead to the dining room which feels like American vintage, with an old motorbike suspended from the wall and retro chandeliers made from clear glass wine bottles.  Lighting is dim, but not dark.  Music is soft, and there’s a nice buzz of conversation throughout the room.   It’s intimate, without feeling like you’re on top of each other.

But on to the food.  We start with a grilled vegetable board and monkfish wrapped in smoked pancetta over cauliflower puree.  The vegetables may sound typical, but what’s different is that they’re not sitting in a plate of oil.  Instead, they’re served on a wood board, with a sheet of parchment paper to absorb the extra drippings, and there isn’t much.   It’s a trick to get eggplant tender, and also avoid it becoming a sponge of oil, yet Valentina’s chef has it mastered.  The monkfish is lovely, though the puree suffered too much potato, creating an overly heavy mash for a starter, but the rest of the dishes make up for it. 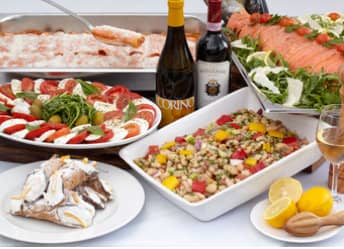 A bowl full of mussels may seem simple and easy, but the garlic, parsley and tomatoes are a perfect combination.  We also taste the calves liver – not your typical deli dish –  which arrives perfectly prepared over grilled asparagus with a red onion chutney.

And the spinach pie…oh my.  I may be getting this wrong, but the dense yet light slice seems to have streaks of melted Fontina running through it.  I know it’s the winning dish as soon as I taste it, and my companion confirms it when she says, “I’m going to have to take some of this home with me.”

Valentina is a great place to break the new year’s resolution about dieting.  We didn’t, but the deli case of pastries worked hard to de-rail us, as did the dessert menu filled with dark chocolate molten cakes and bread and butter Panettone pudding.

As a deli, Valentina has an endless selection, and everything one needs to instantly roll out a “home-cooked” meal from start to finish.  As a restaurant it’s got great, simple, rustic dishes and a terrific way to sample the front of house food.   It’s nice to know this trusty Italian will be in the neighbourhood for years to come.