Flying into Yangon by night and you’re immediately struck by the darkness below. Rather than the sparkling dance of millions of lights you would normally associate with a city of over 7 million, the twilit landscape is occasionally broken by single phosphorescent glows created by enterprising locals cranking-up diesel generators.

As deeply alluring and mysterious the darkened city seems to a new visitor the darkness can be attributed to the country’s frequent power outages. They’re an unfortunate carry over from the country’s totalitarian past and yet another issue for Aung San Suu Kyi’s 14-month old government to put on its burgeoning to-do list after Myanmar’s almost half a century of misrule.

Now while the slow pace of change is riling some, you wouldn’t know it when walking through the streets of Yangon by day. The Burmese (as they still call themselves) couldn’t give a hoot that you’re from out of town as they’re too busy getting on with their lives. If anything, they’re quite blasé.

Bearing this in mind, your first few hours in Yangon will make for a pleasant change of pace. For starters, no-one will be desperately spruiking their wares as you leisurely wander a city where Buddhist heritage, colonial architecture, local identity and breakneck change commingle and vie for a piece of your attention.

When sanctions began to be lifted on Myanmar’s previous regime back in 2011, a number of the world’s leading hotel brands and a few not-so well-known jockeyed to secure their place in the country’s untapped tourism market. Thankfully, many of the less scrupulous developers failed to gain traction with the locals – apart from a few notable exceptions that have been dogged by concerns about their environmental impact since.

For the luxury traveller, a few choices stand out including the Strand Hotel and the new(ish) Sule Shangri-la.  At Lunch Magazine, we suggest hunkering down in the Governor’s Residence by luxury experiential travel group Belmond.

Once the home of the British Governor of Burma’s southern territories, this grand, charming mansion and accompanying 49 rooms is a step back in time to Rangoon’s colonial past – an opulent study in dark teak, manicured gardens and Victorian luxury. With a large fan-shaped pool, delicious local cuisine and grand old bar, a stay at the Governor’s Residence will add a touch of class to your Yangon sojourn.

What to see and do

From the Governor’s Residence, take a taxi to the Nat Muak St entrance of Kandawgyi Lake (it should cost you no more than Kyat 4000, a bit less than US$3). Located east of the Shwedagon Pagoda, the artificial lake dates from British colonial times when it was constructed as a reservoir to serve Yangon’s growing population. Fed through a system of pipes from the nearby Inya Lake, Kandawgyi is hugely popular with locals – an oasis amid Yangon’s concrete sprawl.

Start walking clockwise around the lake, and you’ll come to the Karaweik – an ornate gilt-plated replica of a Burmese Royal barge featuring a restaurant onboard and numerous function and performance spaces.

From the eastern shore, you’ll also get your ideal Myanmar postcard photo opportunity with clear views back westwards towards the Shwedagon Pagoda.

For the majority of the Burmese, Buddhism is the centre around which daily life revolves, so it’s perhaps only fitting that Yangon seems to flow around the Shwedagon Pagoda. Originally constructed in the sixth century or some legends date it back over 2000 years, the Shwedagon is a place of remarkable beauty showcasing centuries of Myanmar’s architecture, arts and sculpture as well as religious relics including (reportedly) strands of Buddha’s hair. Recently nominated to be listed as one of UNESCO’s places of significant cultural heritage, the 110-metre high stupa is covered in gold tiles and diamonds. Without doubt one of the world’s most extraordinary religious sites, the Schwedagon Pagoda should sit at the top of every visitor’s must-see list.

On entry, pad in bare feet up one of the many grand processional staircases to the base of the pagoda. Entry for foreigners is K8000, approximately $US8.

The key is to take your time contemplating the site’s intricate and beautiful structures while watching the locals in prayer or even taking a few moments of quiet contemplation yourself.

Lunch at Bistro by Le Planteur

For a change of pace – and a rather good meal – head to Bistro by Le Planteur, just a short taxi ride away from the Shwedagon Pagoda and located along the shore of Inya Lake.

On the morning of day two, we meet Scottish-born photographer and local artist, Don Wright, who runs tours across the Yangon River to Dallah when he’s not producing art in his Wired on 39 Gallery situated (unsurprisingly) on Yangon’s 39th Street.

Wright’s tours give visitors a glimpse into Myanmar’s rural life as opposed to the hubbub of Yangon. It begins with a trip across the river in a ferry heaving with locals and hawkers keen to sell a broad range of wares. On the other side, we’re met by a number of trishaw drivers and taken to a busy produce market. Like any local grower’s market there are aisles of stallholders where locals buy fresh fruit and vegetables, meat, fish and more but in this instance, the aisles are laneways. Narrow higgledy-piggledy laneways are teeming with shoppers chatting, haggling and buying – commerce in its purest form.

As we move deeper into the village, Wright hands out photo prints to the occasional villager. They’re copies of a few family’s portraits he’d snapped on a previous trip. He says he often does this while also exhibiting some of the pictures as part of an exhibition back at his gallery in Yangon – the proceeds of which he gives back to the village to purchase new, larger barrels for safe storage of water. As far as responsible tourism goes, the use of images as a type of social currency or contract seems a brilliant idea.

Back city-side, head up Seikkantha St and admire the chaotic, colourful and densely packed buildings that make up Yangon’s streetscapes. Having been closed off from the world for so long many of the older buildings are in a state of beautiful decay.

The Burmese love their tea, and you can sample the best at the Rangoon Tea House on Pansodan Road – just up from the ferry jetty. This stylish, upmarket teahouse serves the sweet distinctive local brew all day long. Locals tend to drink their tea with a mix of evaporated and condensed milk – getting the ratios of each just right for each discerning palate is what the Rangoon Tea House prides itself on.

For something different try the Tea Leaf Pork Chops which are marinated overnight in a spicy tea leaf tapenade or sample the flavours of Myanmar with a Burmese tapas.

Around 30 international carriers now provide flights in and out of Yangon. However, if you’re coming from places like Australia or Europe, you’ll have to connect through other cities like Singapore or Bangkok as there are not many direct flights.

To handle the expected influx of international visitors, the airport has undergone significant expansion in recent years, with two international terminals in operation and another on the way. 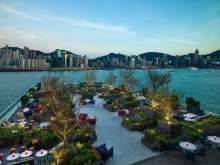