A private jet hire company has dropped everything to answer the burning question: how much does it really cost to fly by private jet and say goodbye to the horrors of regular air travel?

The firm, PrivateFly has produced videos that open up the ‘closed’ world of private jet travel, including information on prices; what happens at the airport; the most popular jets; and if pets can travel too. Spoiler alert: they can.

Also exposed are the secrets of what actually happens at the airport when you fly private.

The world of private aviation has become increasingly reported on over the last few years.

The company says it has taken the most popular questions asked, and answered them in video format, to explain the closed world of private jets.

PrivateFly made the films onboard an Embraer Legacy 600 private jet (a long range jet seating up to 13 people) and at the Inflite Jet Centre at London’s Stansted Airport. Each features the company’s CEO, Adam Twidell, also an experienced private jet pilot, answering one of the following five questions:

PrivateFly’s marketing director, Carol Cork, said: ‘Many people find private aviation a bit of a closed world, and we are asked the same questions time after time.

‘So we decided to produce the answers to some of the most common questions in a short, informative video format.

‘We wanted to be able to show viewers the inside of an aircraft and the facilities at a private jet airport, at the same time as answering their questions.

‘Our aim at PrivateFly is to make booking a private jet easier and more transparent – just like booking airlines or hotels.

‘Private jets are becoming more accessible these days, and are not just a means of travel for the super-rich and famous. Hopefully our new videos will help people to understand the world of private jet travel a little better, by letting them see some of it for themselves.’

‘A few members of our team got to enjoy spending the day on board a Legacy 600 while shooting videos for our YouTube channel,’ she said.

‘The spacious cabin, which can hold up to 13 passengers, was the perfect size for our shoot – allowing for plenty of room for the whole team inside, including the videographer, his equipment, and even catering from On Air Dining.

‘The aircraft’s many windows allowed for plenty of natural light to come in and brighten up the scene without the need for additional lighting. Plus with the comfortable and luxurious leather seats, no one was uncomfortable, even if some scenes had to be redone multiple times.

‘It was easy to see why the private aircraft is such a popular choice for private jet charter customers’.

One of the most cost effective, long range private charter jets on the market, the Legacy 600 offers passengers non-stop private flights from destinations such as New York to London. In addition to its spacious cabin, the aircraft also offers very large bathrooms, plus walk-in access to a large 240 cubic ft. of baggage space.

The new video series is available on PrivateFly’s YouTube channel at: http://tinyurl.com/nk2jx3r 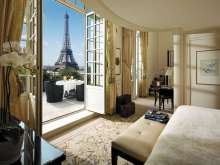 Warmer welcomes await at Shangri-La and…