And the name befits the town as its pampering roots date back to the 13th century, when Benedictine monks used seaweed and the famous Portoroz salt to soothe the stresses of High Middle Ages businessfolk. Later, members of the Austro-Hungarian aristocracy and military officers flocked here for the therapeutic baths.

I was surprised at how busy the hotels were during a recent wintry weekend.  Italians all around, and it was nearly impossible to book a massage, but the Paradise Spa at the Grand Hotel Bernardin managed to squeeze me in.

It’s a good idea to show up early for an appointment at the Paradise Spa, as a treatment allows full access to both the traditional Finnish sauna, as well as an infrared and bio sauna.  The latter two have a chromotherapy system with changing colours and light, meant to restore the inner balance.

When you’re done with the disco saunas, there are two steam baths, a Mediterranean and Thai, as well as a Hammam for scrubdowns. If this all sounds like a bit too much chill-out time, there’s an indoor seawater pool long enough for swimming laps with views of the sea and the sunset,  and a fully equipped fitness centre. 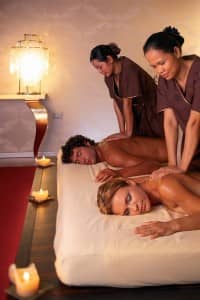 The Paradise offers both Western and Eastern-style treatments and their specialty is a four-hand massage, which may sound like a game of Twister, but I’m sure it’s actually rather hypnotic.  Massages range from traditional Thai to aromatherapy, lymphatic drainage, hot stones, Hawaiian, and sports, which is what I settled on.  I’m not sure the petite Thai woman knows what she’s getting into when she attacks my heavily knotted shoulders.  She manages to loosen them up, though I’m a bit worried she may have sprained her hand doing so.

On my way to the dimly lit parlour where everyone gathers for post-treatment teas, juices and fruit salad, I spot a seductive room with twin mattresses for a couples massage.
I’m starting to see how some can spend an entire weekend in paradise.

Amy Hughes Just two hours’ drive from Slovenia’s capital city, Ljubljana, lays Portoroz (port of roses), set against the Adriatic on one side, the Istrian countryside on the other.  It’s a tiny little town that attracts mostly Italians unaffected by the recession.  The Italian border is less than 20 miles, (Venice just two hours away) …

Olives, truffles and wine in Slovenia

Amy Hughes In the heart of Europe, the tiny nation of Slovenia shares borders with Italy, Croatia, Hungary and Austria. With a countryside as diverse as its surrounding neighbours, Slovenia has been opening up its farms to tourists the last several years, but is stepping up the effort with a bid to become a serious …