But the tenacious flame-haired Scot who has headed one of Australia’s premier cultural icons (Sydney's Museum of Contemporary Art) for the past 13 years says that is just what overseeing its $53 million revamp has made her.

“It’s been humbling, exhilarating exasperating, but finally it’s come together and look at the results,’’ she tells Lunch Magazine from the Sculpture Garden on level three of the new wing that was three years in the making.

“There were moments when I thought it was never going to happen and I felt like saying “let’s give it up and go home’.’’

“But the results justify all the hard work.’’

She says the much-maligned old building had become untenable.
“As the numbers increased problems became acute. Eventually the museum would have just imploded.

“We want people to have a lovely experience when they come here.“And that’s what the new wing does. It allows people to flow through, take in some art, come up here and have some coffee or admire the view, maybe do something practical in the digital studio. So it’s become much more of a pleasurable experience.’’

She praised the $15 million contribution from philanthropist chairman Simon Mordant and his wife Catriona, which made the revamp possible.

“Simon and Catriona’s contribution was much more than financial - they kept us going; they really believed that we could do this together.

“He always said: ‘Remember I am a solutions person’.’’
"He is a phenomenal and inspirational person to be working with.''

Ms Macgregor says private philanthropy is critical to the arts in Australia.

“It’s important we get recognition from the government and that is partnered with funding from private individuals. 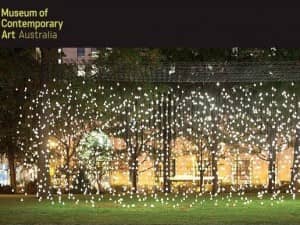 Mr Mordant says private philanthropy is vitally important for the survival of the arts community.

“If you want a creative and vibrant community the arts are absolutely core to that,’’ he tells Lunch Magazine.

“This institution was bursting at the seams; we had 600,000 visitors up from 100,000 10 years ago. Without this expanded institution we would probably have peaked and started to go downhill.

It’s a very humbling experience and something I’m very happy to be a part of.’’

Mr Mordant, who is also co-chief executive of Greenhill Caliburn, a leading independent corporate advisory firm, says there is no better location on Earth for the MCA.

“Our audience is 80 per cent local, 20 per cent tourism and it’s an incredible location.’’

Asked about attempts to move the MCA from its harborside seat he says the MCA had a lucky escape.

“There were many attempts to get the institution to move from this site over the years and as chairman, I fiercely resisted that.’’

And as far as his personal stake in the MCA’s success goes: “I made a philanthropic gift with my wife of $15 million to make sure this happened, I have been involved with the institution for a long time - since 1989. When I immigrated to Australia in 1983 I was surprised there was no institution associated with contemporary art in Sydney, and now look at what we have.’’.