I’m not sure Tunisia’s founding fathers gave it much thought, but if they actually sat there hundreds of years ago pondering what to name their new discovery, and considered one of its most natural off-shore resources, then I’m really rather impressed. In case you hadn’t guessed, tuna is the national topping. It’s practically like salt or pepper – it’s on EVERYTHING...crepes, omelettes, even pizza. I like tuna as much as the next guy, but I’m more the seared, just blue-type tuna girl, not the flaky variety, so there’s been a lot of, “sans thon, s’il-vous plait.”

Anytime of day is good for tuna. In fact, it seems Tunisians hardly ever eat at home. There are snack bars, cafes and fast food joints everywhere and people always seem to be eating or drinking something, no matter the time. Fast food here is a bit different than in the West. Grilled chicken or schwarma layered with salad in wraps or thick bread, and heated somehow feel healthier than at home. In fact, it’s the equivalent of deli food, at a fraction of the price. 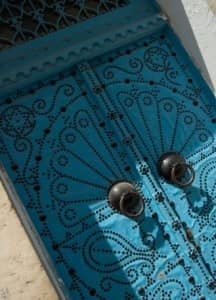 Sitting at any one of the outdoor cafes that line Avenue Bourguiba can provide an authentic experience as Tunisians linger all day long, over coffee, or ice cream. But if you want to dig a little deeper into the culture, and your French is better than restaurant level, then a Wednesday lunch in Beit al Bennani is a must. At the edge of the medina, near the Kasbah, is a small blue doorway which opens every Wednesday at noon. Enter, and you’ll find a courtyard walled in mosaic tiles, the home of Mohamed Bennani’s family since 1876.

Bennani opens his home each week for a lively luncheon, hosting local and visiting scholars, authors, journalists,(Bernard Henri Levy is a guest when he’s in town) and whoever else can keep up with the conversation. Some days that includes the homeless. The guests constantly rotate, and it’s a casual, drop-in basis. No invitation needed. The menu, however, is always the same: homemade couscous and slow roasted vegetables, always with Tunisian wine. Tunisia’s couscous is renowned for being lighter, and fluffier than Morocco’s. I can attest to the fact that the taste is light as a feather, and pillow-like.

This kind of salon is a typical Tunisian affair. The former French colony has held onto many French customs, a vibrant community of intelligentsia perhaps one of the strongest traditions to remain.   Tunisians are raised with an important emphasis on education and are encouraged to leave the nest for university. Academics achieve pop idol status in this country, the way they do in France.

Mohammed is a big character, warm and welcoming, but be prepared to while away the afternoon. He’s got a famous library, filled with nearly a thousand books in French and Arabic, and some 14,000 historical photographs of Tunisia. If you’re a history buff, you’ll be invited to linger.

Legend has it that the Bennani family came to Tunisia in the 19th century as Jews from Andalucía. Monsieur Bennani certainly has an affinity for the Jews, and is proud of several books describing the friendly relationship between Arabs and Jews in Tunisia. But while Tunisia is a secular society, and both synagogues and Catholic churches stand side by side with mosques here, Bannani is guarded about his Sephardic connections. No matter, the mystery makes it all the more interesting. 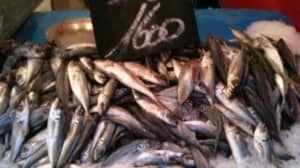 If you’ve read the current Economist, perhaps the latest Foreign Affairs, and a bit of Sartre, you’ll be well-equipped for a Bennani lunch.  Head into the souk, heading to the northern edge of the medina, come out by the Kasbah and ask for Beit al Bennani – it’s the small blue door heading down the left side of the Kasbah, doorway on the right.  And don’t worry, there’s no tuna on the menu.

Amy Hughes Less than three hours from London lies Tunisia, the most progressive country in the Arab world, birthplace of the Arab Spring, and home to a fusion of cultures. This former French colony has retained its European sophistication, and is situated closer to Sicily than most of its Arab brethren, making it an interesting …