A Latvian chef has started to serve a local alternative to maple syrup, taking a new twist on a very old tradition.

Latvians have been celebrating the end of typically, long, snow-filled winters with an annual rite of spring that dates back to the 17th century. As the ice begins to melt, and the ground warms, families gather ‘round their birch trees to tap their sap, producing a clear juice.

Latvian birch juice producer Linards Liberts says the practice began because of the plentiful sap which flowed from the birch tree, more than any other, in springtime.

Birch sap, and the tapping process are a national pastime. Latvian chef

Martins Ritins taps enough sap in one season to last him, and his patrons, all year long.

“When it’s sunny, you can get 20 liters (4.5 gallons) a day from a tree. The season is two-three weeks. Each tree produces a slightly different taste.”

And trees in one part of Latvia may come into season at a slightly different time than another, meaning a birch sap devotee could, literally, spend almost a month tapping trees in different regions around the country.

Ritins says the best time to drink birch juice is at its freshest: within the first six hours of tapping. His favourite method is to hold a glass, rather than a bucket under the tap, to taste the first run.

There isn’t much of a recipe for preserving the stuff, but most Latvians store the birch juice in glass bottles with a few raisins, lemon rind and a twig from a black currant bush, as natural preservatives. Some freeze it; others simply store it in cool locations to avoid it spoiling.

Sparkling birch wine, made from fermented juice is a popular mid-summer drink, and Ritins serves it to the visiting dignitaries he often cooks for.

The juice does have a refreshing, clean flavor. My American palate was expecting to be hit with a syrupy sweetness. But Ritins explains birch sap only contains 1-2% sugar, unlike maple, which has 8% sugar content. It’s also a different kind of sugar. Birch is made up of fructose, which has the lowest glycemic index of all sugars, while maple contains primarily sucrose.

Latvians don’t add sugar as that would contradict the whole point of the drink being healthy. The juice doesn’t suffer, though. It’s not bitter, but rather light and quenching. It’s known as an elixir, hailed for its detoxification qualities, and high vitamin and mineral content. Vitamin C, potassium, manganese, thiamine and calcium yield some of the birch sap’s benefits.

Birch syrup is definitely a bit healthier, as sweets go, but the real reason it hasn’t achieved culinary status is because it takes so much to produce. For just one gallon of birch syrup, you’d need 100 gallons of birch sap, whereas the same output of maple syrup only requires 40 gallons. The sap is put in large pots and brought to a rapid boil to reduce it into syrup. 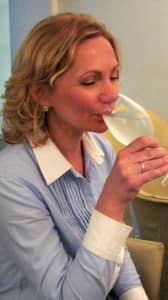 Ritins has started serving birch syrup in his restaurant. It’s great with desserts, and as a topping for vanilla ice cream, with its sweet, and slightly balsam taste, but one, diminutive bottle costs the equivalent of $10 (US).

There is hope, however, for the future of birch syrup. The tree is indigenous to Alaska, and, one company has managed to produce 1500 gallons, considered the biggest output anywhere in the world. But it’s a long way to go for a healthier alternative to good, old fashioned maple syrup.