Dripping with sweat and on the verge of hallucinating I sit and squirm on a heat conducting marble slab in the Oriental Hammam inside Dubai’s One&Only Royal Mirage resort. Underneath me is the heat source for the steam room and I shift uncomfortably while wondering when I’ll begin to fry through my rather fetching paper y-fronts.

Across the small room on the cooler timber bench are two largish chaps who could be gorillas in the mist due to my current hallucinatory state. They are in fact two expat Libyans who sense the pasty, sweating white man can only speak English so they change languages for my benefit.

Dropping their intense Arabic conversation the larger well-waxed chap says: “Gaddafi’s son, Saif Al Islam, he threw the best party in Monaco a few years ago on the biggest yacht in the harbour. He spent $40 million US and there were so many beautiful hookers for all of us – more than one each.”

They both looked across at me hoping to elicit some sort of response and I didn’t disappoint … “Was each one more beautiful than the last,” I enquired.

“Ah yes … all models … supermodels. He knew how to throw a party. So much money and many women and drugs. Very good for Libya. He was a good ambassador for the country. Everyone went to his parties – princes, politicians and celebrities.

“Any women guests?” “No just the hookers,” my newfound Libyan friend replied.

I was about to ask where Saify-boy might have acquired the coin to throw such a monstrous party when my masseur returned to take me further inside the hammam for a solid scrub. I’d had my pineapple, mint and apple juice and was keen for a vigorous rubdown.

A massage is one of my favourite rituals after a flight. An hour or two of complete bliss while stiff muscles and tight joints are slowly worked back to their prime. I’d been in Dubai for around 24-hours and had just interviewed the tennis player Roger Federer. He had exuded the detached bonhomie of the truly disinterested as I asked about his career, passions and love of Moet & Chandon.

As a reward for not doing a whole lot I had decided a traditional Moroccan massage might be in order and it was proving to be quite an excellent experience.

The One&Only spa is a complete oasis – a haven of winding corridors turning this way and that with dramatic archways leading into the Hammam. Once inside the calming sound of running water echoes from the ornately tiled walls and a richly scented fug of steam blurs the vision as sweat pours out of every pore. It’s oddly invigorating because of my deluded belief that every bead of sweat was a toxin being forcibly escorted from my inner being.

I’m led into a small room and lie down on a pleasantly warm marble slab where the attendant slowly washes me with cool water. He then applies with gusto a covering of Moroccan black soap and scrubs rather vigorously with an exfoliating glove that draws away dead skin. There’s plenty.

He holds up the glove at regular intervals to show me the thick layer of ooze I happily seemed to wear every day. A lot seemed to be coming off and I wondered if so much of my skin was dead, maybe I was too. Maybe I’m a zombie – it would certainly account for my pastiness.

When I’m reduced to a few vital organs contained within a skeleton the masseur stops. It’s back to the steam room. Unfortunately, my Libyan friends have gone. I’m alone and slowly start to construct a political thriller in my head. Yes it involves Libyans, hookers, drugs and a couple of nuclear weapons and it’s all set in Dubai – a city designed by spoilt billionaires who never grew up.

Just as my thriller gets to the interesting bit my masseur beckons. He ushers me back to my private slab for a eucalyptus ghassoul body wrap and a black Yemen honey facial before a massage and final cool hand wash.

From there I was led back into a chillout area and served Moroccan tea with dates. I had never felt so calm, clean and relaxed. All I could hear was the sound of running water and the gentle slap of flip-flops on tile.

While sipping the tea and slowly sliding into a daydream, a gentleman from Abu Dhabi suggests a game of chess. We share tea and dates while chatting about Dubai and the state of its finances and construct a good mannered diplomatic stalemate on the chessboard.

After he took my Queen he remarked that this was the “Best Hammam in the Middle East. I fly from Abu Dhabi to come here every Saturday.”

There was no argument from me as long as he didn’t mention the progeny of despots or hookers or super yachts and blow. I just wanted to be in my happy place. 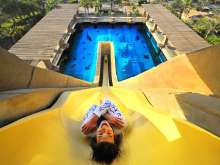 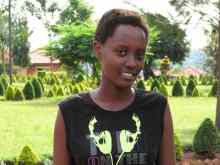 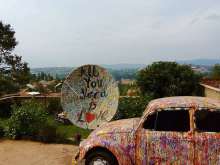 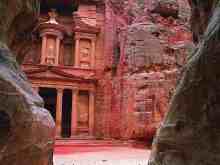