Set in the centre of Europe, Slovenia has recently elected a new Prime Minister,  Zoran Janković. The former Mayor of the capital city Ljubljana, Janković is credited with creating what many consider a model city for its pedestrian and bike-friendly city streets. I take a whirlwind tour with Ljubljana’s Deputy Mayor Janez Koželj and urban mobility expert Blaz Lokar.

Blaz’s priority is creating cities built for two – as in, two wheels, or two feet.  “We want to put pedestrians and cyclists first and public transport.  That’s the Plečnik Square....you’ll see a lot of architecture by Plečnik.”  Blaz has worked closely with Ljubljana’s Deputy

Mayor, and Chief Architect, Janez Koželj to pedestrianise much of the city in just four years.  “That is the congress Square. One year ago it was the largest parking place in Ljubljana.  It was really constantly full...buses, private cars....you can’t imagine the difference.The main priority is traffic conditions.  It’s connected with the values, with the way of life.  We invited people back to the city and the people are coming.

Blaz describes what Ljubjana looked like five years ago. “It was full of traffic. They banned traffic from the square. You could see taxis parked here on the square - now there’s a daily market and hundreds of people.''

You can see the people responding, he says. 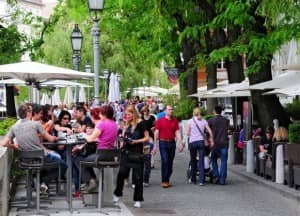 I ask how pedestrianising the city affected  local businesses. As we ride through the center of town, Blaz points out areas teeming with new cafes and restaurants. Even on a winter’s day, people sit outside under heaters alongside the Ljubljanica River -  an important artery since Roman times - sipping cappuccinos.

Blaz explains.  “We have removed the same amount of parking garages on the surface and just put them underground. If you want to make the cities friendlier, you should start to redesign the public spaces first, then you’ll have more people, more people means more investments, and then you’ll have nicer facades, new cafes popping up, everything...the foot-traffic in the newly pedestrianised areas has tripled.”

They’ve also built seven bridges, and even renovated and relocated a historical bridge, to create promenades throughout Ljubljana. Having mastered the pedestrian issue, city officials have finally started tackling another big problem: the pressure to build a mosque in the capital - the first mosque here in 40 years - to support the 100-thousand Slovenian Muslims.

For architect Vasa Perović whose firm won the contract, there’s enormous pressure to get it just right.

“This area was under Ottoman rule for a long time, therefore the expectation of the local community was to go back to some of the traditional Ottomon architecture, for us it was more a return back to the origin of Islamic architecture. So we have proposed a kind of a mosque which is at the center of the complex which contains a school and apartments and shops all of which relate to the community, a small village in a relatively contemporary design to bring back the ideas of, let’s say the first tents, so the idea is to make something much more fragile, and monumental." 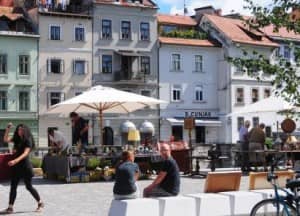 It’s not every day an architect gets to create a new landmark.  The mosque is slated to open in 2015, and many hope it’ll serve as a model for other European cities.

While Vasa Perović labours over his designs, my tour guide, Blaz points out Ljubljana’s community is expanding.  “We had urban sprawl.  So for the last ten years people moved out of Ljubljana, so the number of people living in neighbouring cities increased, but in the last two years the number of people moving back to Ljubljana increased. So I think people responded to the changes in public places.”

They responded, but for Blaz there’s more work to be done. “We have a good culture of cycling in Ljubljana.  We have a 10% modal share but we can do better.”

As the sun begins to drop, and we park our bikes, I ask the Deputy Mayor what the real secret to the project’s success was. “The key for this project is how to escape administrative obstacles.”

Words of wisdom from a small country hoping its converted capital city is one worth copying.