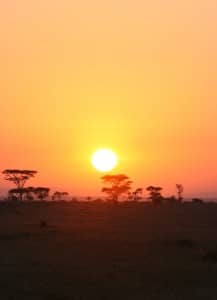 The beast glares at us balefully before turning her attention to the target: a diminutive gazelle carelessly chewing a mouthful of grass. I have entered the Serengeti, and I watch in awe.

My travelling companions and I arrive at a campsite completely free of protective fences and open to curious wildlife. As we settle in, a large buffalo lumbers by on the other side of my tent and blinks at me without malice before finding something worth eating.

After setting up camp we roar off in the open-top four-wheel drive with wise-cracking guide Mike at the wheel.

Almost immediately we’re greeted by the dainty, awkward beauty of a giraffe. She languidly strolls behind a tree in a vain attempt to hide, occasionally poking out her head out to check out the scene – which is us.

After a couple of hours driving, taking more photos than are necessary of the plenitude of animals that appear every five minutes as if on cue, we retire to the campsite.

Cook Musa conjures up a meal owing nothing to vegetarianism; and, with my thirst for wildlife temporarily quenched, a single lukewarm Safari Lager suffices. Tired and excitedly anticipating for the next day, I fall into a deep sleep.

I awake in the early hours of morning busting for the toilet, and contemplate whether stumbling in the dark and squatting over a concrete hole is worth the effort. A beast brushes my tent, then another and another. They cackle and grunt. They are hyenas. I have lost my desire for the pit latrine - literally scared shitless.

After a perhaps too leisurely breakfast, we head out in the 4WD unsure of what lies ahead. Within 20 minutes we get a good feel. A leopard is sitting in the open, lazily eyeing a gazelle but apparently not seriously considering pursuing it in the already blazing heat.

His mate the cheetah soon crosses our path. A misleadingly innocent visage framed by blood-soaked fur; a bulging RSL belly showcasing the reward for a morning’s toil.

Guide Mike expertly navigates us around the route he has planned - encountering antelope, birds, hyenas, jackals, an occasional bloat of hippos and some mating elephants.

Mike’s favourite form of wit is to feed us false facts, “The baboon can only mate once a lifetime,” he says sadly. “Really?” comes the shocked reply, causing Mike to burst into laughter at our gullibility. The animal spotting and jokes shepherd hours that pass like minutes until it’s time to return to camp. Everyone heads to bed early.

On day three we head off before the Serengeti dawn. I watch an ochre sun rise over the golden savannah. On the horizon are hot-air balloons. But I’m more than happy to be earthbound with Mike, even though the wisecracks don’t quite fit the glorious creation of a new day.

As the sun struggles above the earth, its glow transitions from gold to gritty yellow and we stalk the plains and the endless long grass. The 4WD squeals to a halt, jerking us from our torpor. I’m alarmed, but there’s nothing to see but a herd of gazelle.

"These gazelle are not happy," says Mike, stepping out of the car. He scans the area through binoculars, pauses and smiles: 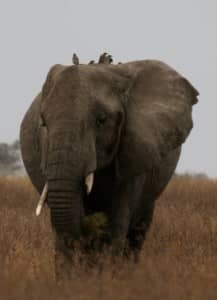 "Cheetah, two cubs". Those gazelle are in for some excitement.
And so we roll on, spotting some lions resting in the distance and, as we meander around a knoll, a beautiful lioness gracefully perched on a mound.

She is no more than 10 metres away and transfixed on a gazelle.

A gazelle unaware of the word ‘predicament’. True, the creature gives an occasional glance in the lionesses’ direction, but uncomprehendingly, or deeply philosophically about its walking mini-bar status, continues grazing.

The gazelle’s every mouthful allows the lioness to drift silently closer, and the tension escalates with each precisely placed paw.

Then, with sudden insight, the gazelle is forced to take cover in the long grass. Too late.

In an instant the lioness springs and clasps the creature by the throat. And it is over. Could it be so quick?

Before we depart the lioness struts proudly past our truck, gazelle hanging from her jaws. I could touch her if I reached out, but opt for prudence. This is the Serengeti and I’m a guest who wants to get out alive. 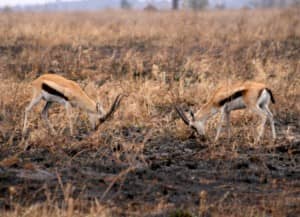 Our 4WD pulls away leaving the lioness to enjoy brunch. We of wide smiles and high-fives ask Mike how often he sees a lion make a kill. “I have seen seven in 30 years".

So we leave the Serengeti. No one speaks much. The Serengeti magic has sunk in and remains undiminished.
I am not sure that it’ll ever entirely evaporate.