Slovenia just celebrated its 20th anniversary since declaring its independence from the former Yugoslavia. Among the remains from that era is the former military barracks, but it’s been turned into something which doesn’t at all resemble its past.

Artist Damien Krazina takes me on a tour of Metelkova City. Enter from the main road near Ljubljana’s bus and train station, and you’ll find a complex of seven buildings, covered in graffiti, all with an aggressive, in-your-face style of art. It bears no resemblance to its former self.

So what was it before? I ask artist Damien Krazina.  “It was military of the Yugoslav army. All the studios are the same size, the same rooms and in this floor there are concert places for the music. Outside is an open air stage for concerts during the summer and 20 artists have studios in this building. “

He shows me his workspace. “This is my small studio. I’m a sculptor. I work basically with sculpture, drawings and paintings. I like the space because I can leave it as it is...dirty. I like this dirtiness; It works as inspiration. (Oh, is that what they call it?) It’s a bit cold sometimes.”

But not as cold as it was almost twenty years ago when artists squatted here, putting pressure on the government to turn it into a cultural centre.

Natasha Cedes runs Metelkova and explains how it all began. “It started as an initiative of Slovenian artists, producers, concert organisers, cultural workers in the late '80s, because there was an urgent need to get production space. They had a lot of ideas because it’s a very precious location.  It’s in the city centre; it’s close to the bus and tram station.”

Most politicians wanted to turn it into a parking lot, and were so determined to fight the artists who squatted; they turned off the heat and hot water in the middle of winter.  But the artists prevailed, creating a centre that not only defied  the system, but is now thriving as an alternative centre for kids, teenagers, retirees, the gay community, disabled people, tourists, locals, you name it.  Natasha says there’s just one rule. “Metelkova is the most well known because of concerts, all types of alternative music...a lot of different styles, but strictly non-commercial. That’s the condition.”

Metelkova is also known for its gay and lesbian clubs. There are some 80 events, from concerts to book readings held every month for the entire community. And its bar is well known for serving the city’s cheapest beer.  And for underage teenagers, Natasha says  it’s a cool place to hang out on a Friday night. 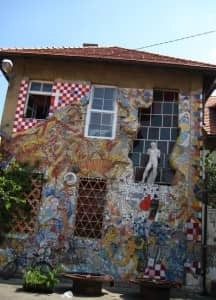 “They come every Friday after school and hang out until after midnight.”  I ask what there is for them to do here.  “Nothing.  Of course, everything for them. Usually they just hang outside here.  And we are just maintaining and decorating space that is attractive to them. For example we have this watchtower here. They can climb and see from a distance their friends coming. Parents somehow recognise that this place has enough safety for their teenagers.”

Artists like Damien say the atmosphere is perfect for the creative spirit. “For me, I know a lot of people here so it’s some kind of community.  We know each other.  We also have several artists who work together as a group of artists. We have exhibitions together, so it’s a very positive vibration in the home of Metelkova.”

The city of Ljubljana still owns part of Metelkova and artists like Damien pay no rent – just maintenance. Damien says he would struggle without the subsidised studio. “It’s very hard to earn money as an artist in Slovenia.There is no real market for it. There are two galleries which are very serious and because of that it’s very hard to rent a studio. Here I work with Gallery Alcatraz, which is also in Metelkova and we are going out for the art fairs and trying to sell our work s in the international field.”

Slovenia may be a tough art market, but Natasha says many of Metelkova’s artists are rising stars. “Some artists who came here as students, now I recognise their work because they are doing national paintings. Most of our artists are not anonymous...far from that.” 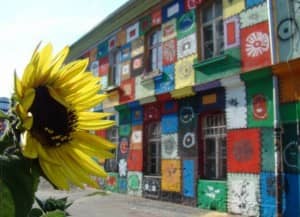 Neither is Metelkova. In perhaps the most complimentary of ways, the artists seem to raise the profile of the centre, and vice versa.  Natasha explains the real secret to Metelkova’s success is its historical contrast. “Metelkova is special because of the whole history. Squatting in the ex-military complex, so from a really rigid military concept into a free art space...that’s something really important. It’s the image; the way it looks, that still everything is possible, what is nowhere else possible. It has a Metelkova style.  It’s very Metelkova.”