Forget about the bathrobe, if you’re going to steal one thing from New York’s Chatwal Hotel, take the mattress - it’s worth $19,000.

The Chatwal is the crown jewel of Starwood’s Big Apple hotels.  The only Manhattan hotel in its tier, this is luxury with a discreet, but definitely capital L   Set on 44th Street near 6th Avenue, it’s also in the heart of the Theatre District, an area crowded with 3-star hotels, making the Chatwal a stand out choice.

A 24-hour butler stands watch over the lobby, which feels like a step back in time.   The building is listed on the historic registry, and in keeping with the vintage theme, Stanford White decorated it in a 1930s Empire Art Deco style.   It wouldn’t be surprising to find the ghost of F. Scott Fitzgerald at the gleaming chrome-lamped bar, or in one of the rooms, sitting at the Louis Vuitton-inspired writing desk.

Rooms are decorated with soft leather wall coverings, floor to ceiling, and steamer trunks hold a host of toiletry goodies.   Concealed TV screen panels are built in opposite large rainforest showers and the toilet seats are heated – a benefit in winter and summer, in case the AC turns the bathroom into a meat locker.

Top-shelf bevvies fill the mini-bar, with bottles of Patron and Johnnie Walker Black.  There’s even a mini-library, with copies of American classics in the closet.

The rooms become dark and cavernous at night, creating perfect conditions for a great nights' sleep on the hand-made mattress, and the 400-thread count Frette sheets.   While you recharge, so can your iPod.  Docks have become more standard these days, but the Chatwal does one better.   Fancy trying an iPad?  No problem.  They’ve got loaners.

In London, a hotel like the Chatwal could get away with charging a king’s ransom for Wi-Fi, but they instead give it away for free, along with newspapers, and even a complimentary car service.  It’s on a first-come, first-serve basis and will take guests anywhere within ten blocks.

You might have guessed a hotel like this prides itself on its spa services.  There are hot and cold plunge pools and one of the most prized features for a Manhattan hotel: a salt water current pool big enough for 1 or 2 people to swim.  The only rub is that three different people advised three different opening times.  Eventually, the pool opened at 8.30am.  Those staying at The Chatwal will be up and at ‘em already, either taking in the sights, working hard to pay the hotel bills, or having fun spending it.  Swimmers are early birds.   But the gym’s open early and offers the usual cardio and weight gear to kick things into action.

Despite its reputation, New York’s a friendly town.  People will walk five blocks out of their way to give foreigner directions.  But The Chatwal takes it to a whole new level.  Operators answer the phone after just one ring, are friendly, personable, and actually want to help.   We lucked out when we had to switch rooms.  Brad was manning the front desk and not only handled the problem quickly, but stayed for an interesting and engaging nightcap, without the tipple.  We learned all sorts of things about the hotel and what could have been an aggravating experience, turned into a great late night chat.  Apparently this is exactly what the hotel is trying to achieve – a warm, familial vibe in the big, bad city.   And with Brad at the front desk, they hit the mark.  But you may not get past him with a mattress. 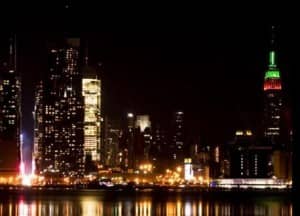 Manhattan’s most famous green space, Central Park, sprawls through the center of Gotham City. But, edge a bit further out … and a 20-minute ride on Metro-North’s commuter train will take you to the New York Botanical Gardens(NYBG) in the Bronx. Welcome to 250 acres of tranquility – in New York City. It’s autumn, the …

People say you get what you pay for. But that’s not always, strictly the case. At Yale University’s Center for British Art, it’s most definitely not the case. An hour and a half’s drive from New York City will deliver you to New Haven, home of the ivy-clad heart of America’s ivy league. In the …

Jake’s Hotel is a Caribbean treasure

For hedonists in search of a quiet patch in a sometimes troubled paradise, the ocean views and spiced jerk chicken aromas at Jake’s Hotel in Jamaica immediately seduce the visitor. A modest family-owned hotel, Jake’s is only a nine-minute walk from the pristine waters and string of secluded coves known as Treasure Beach on Jamaica’s …