There’s something cool about saying, “I’ll be in Iceland this weekend.”

It’s a few years on from the nation’s trail-blazing financial crisis, and its unique, democratic approach, calling two referenda which led to the collapse of Iceland’s three main banks. Iceland finally became affordable for the rest of the world with a devalued Krona. Icelandair wasted no time shifting marketing budgets abroad, and tourists have been weekending in Reykjavik ever since.

There’s plenty to fill a few days with in this city set on the North Atlantic. And if you like to party, you’re in great company. Reykjavik is a late night town. Take a hotel room in the trendy section, on a low floor, and you risk being up all night. My top priorities are usually free Wi-Fi, a gym, and a decent breakfast. Based on this, I was directed to the four-star 101 Hotel, just off the main street in Reykjavik, lined with shops, bars and restaurants.

101 pride itself on being an uber-trendy boutique hotel and it is. Almost achingly so. The staff are the hotel’s finest feature. They’re warm, welcoming, and familial. The rooms are Nordic minimalist, hard wood floors, and, lots of natural light. One pet peeve is hotels where the temperature is regulated automatically, with no option for adjustment in the room.

I also tend to find a lot of in-room thermostats rather fiddly. 101 has a very simple, easy to use system, and if the winter heating is still a bit much, there are plenty of windows, which actually open. 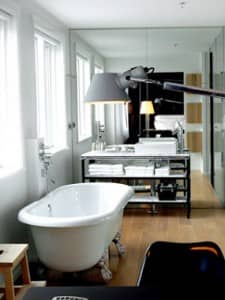 I was lucky to get one of the few rooms that’s both quiet, and has a bathtub (304), which is footed and stands in the room, as opposed to separately. It works well in the room and creates a spa-type feeling, especially once an iPod is plugged into the Bose dock. If one’s feeling a bit more sociable, there is a sauna and Jacuzzi downstairs, near the gym.

Aveda products in the room are plentiful, as are Blue Lagoon products available only to purchase.  I’m told they’re working on hotel sizes which would be a great way to try the brand. Quagliotti linens grace the bed, and oh my, they’ll soon make you forget any love affair with Frette.  The Italians may do food well, but they also do the softest, lightest linens around.  You’ll find the same sheets at the Hotel Crillon in Paris.

In typical boutique style, the minibar cabinet stocked all sorts of games and goodies, but somehow it made me feel like I was being tapped for additional revenue. After all, do people really run out of underwear these days, and if they do, how many forgo a local shop for the in-room one on offer?  Maybe it’s meant for the likes of Harrison Ford, one of the many celebs I’m told is in residence at 101 when there’s a premiere or junket.

The common area of 101 is like a much smaller version of the Charlotte Street Hotel in London, and other, similar spots.

There’s natural wood, a fireplace, great light, and lots and lots of magazines (a highlight if you’re a vast consumer of information like me). I’d have liked a morning printout of the IHT just to get my daily news fix. But the lounge area is what separates those who stay in a hotel to, well, lounge, to mingle, or to head straight to their room. When I’m on a writing trip, as I am this time, I sometimes like to head down to the lounge during down time to tap out a few paragraphs, away from the distraction of TV and the aforementioned bathtub. But 101’s lounge and bar is so cool, it’s virtually standing room only after 4pm, any day of the week. If you want a taste of the trendy social scene in Reykjavik, there is no other place to stay. 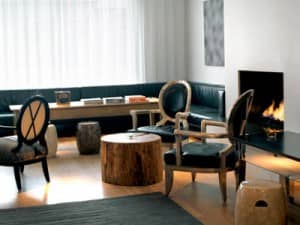 But on the work front, I must admit, the Wi-Fi is uninterrupted, and thankfully, uncomplicated.  No long passwords containing impossible combinations of letters, lower case, caps, and numbers, no boxes to tick, just an instant, steady, seamless connection which greets you like a doorman as soon as your feet hit the welcome mat.

Once you’ve partied hard, and slept it off, check out a few of the local attractions. Just up the street, about a ten –minute walk, is the landmark Hallgrimskirkja Church. The architecture is unusual and it houses one-thousand worshippers at a time.

Just opposite the church is a fantastic local cafe, perfect for sampling local cuisine. Cafe Loki is owned by Hronn, a former textile designer, who is passionate about Icelandic cuisine. Her husband Porolfur bakes the famous rye and flat breads, a dense, sweeter version than the German, with a recipe that requires eight hours of baking at a low temperature. Leftovers are used for bread soup and rye bread ice cream.  Yes, rye bread ice cream. Hronn tells me ice cream is an Icelandic tradition, and most families have their own, unique recipes.  Cafe Loki’s rye bread version is wonderful, with bits of rye bread mixed in a creamy vanilla, topped with a dollop of whipped cream and rhubarb syrup.

Other authentic treats include Skyr, similar to Greek yogurt (forget what’s served in hotels and try the real thing here), and dishes like Icelandic Braveheart, schnapps, bread, dried fish, butter, and fermented shark.   Easy to see how it got its name. Bites here won’t break the bank and it’s perfect for a snack or casual meal.    It’s also decidedly un-trendy, and makes for a breath of fresh air from all that partying like a rock star.