TRY describing a train ride through Switzerland and Italy in summer without using the word postcard, go on, I dare you.

First down to basics, the first thing you notice about trains in Switzerland is they work. I mean they really work. They leave on time. They are clean. You can use the toilets without a level five bio-hazard suit or renovating the joint before sitting down.

The trains are amazingly cheap, most of the long distance ones have bars and restaurants and the Swiss Pass gives you access to 20,000km of rail, bus and boat lines across the nation.

My first encounter with the amazing efficiency of the rail system is from the cocoon of a business class seat on board a Swiss Air flight. After clearing passport control, the station is just a short walk and an escalator ride away.

A mighty steel behemoth is waiting to take me for the 15 or so minute journey to Zurich. A quick change and it's off to St Moritz.

Suddenly I'm on a train from the past and the future. The past in the sense that it's clean and my fellow passengers don't need a turn at the sheep dip (where did my country go wrong?) and the future in the ultra modern sleek speediness of the beast.
High in the mountains the conductor tells us we can open sparkling clean windows to get a better view and to take shots of the Landwasser Viaduct.

It is a spectacular view of the train going into the sheer cliff face.
How long has it been since passengers in NSW were allowed to open a train window … I used to ride hanging half out the door finishing a durrie.

But the Swiss are a sensible nation and they expect their citizens to behave responsibly, something we can't expect in Australia any more, sadly. 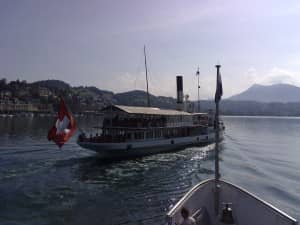 I'm pretty sure the Landwasser was the cliff face that Frank Sinatra machine-gunned an ME-109 from in Von Ryan's Express.

Suddenly I'm in St Moritz, a three minute stroll and an escalator ride away and I'm ensconced at the Hauser Hotel. An astonishingly short time later I've had a shower and I'm sipping a half litre of crisp Calanda beer for $9.50 in the Roo Bar (as in kangaroo). That night there is a barbecue in the Australian-themed restaurant featuring wild boar, steak, prawns and pretty well anything else you can think of thrown onto piping hot German grillstones at the table.

The next day it's time to dust off the trusty Swiss Rail pass for a trip over some mist covered fairyland mountains to the ancient Italian border town of Posciavo.

It had been a while since I put on the nosebag, so luncheon in the town square at the Hotel Abrici seems like a good idea after a stroll around the town. I inhale a veal saltimbocca, with saffron risotto washed down with an 1992 La Scala nobiolo riser via valtellind superiore. Go for it if you've got the budget.

It must be the mountain air, but I also manage to sample a pizza coated with some air-dried beef brought in from nearby Brusio. The chef has covered the cooked pizza with rocket and shaved parmesan and it's pretty hard to stop eating.

The next day it's time for a dip in the lake at St Moritz, and off on the postal service bus, Palm Express, so called because it takes you from the mountains of St Moritz to the palm trees of Lugano.

It runs alongside Lake Como but sorry ladies, there is no sign of George Clooney. Along the way you duck inside the Italian border and there is a concomitant deterioration in the standard of driving along the steep winding mountain roads, clearing by centimetres the walls of villages that have stood for thousands of years.

It was easy to ignore the screaming passengers because I had dosed myself with a cognac and a beer in a sleepy Italian tavern we stopped at just inside the border.

My favourite moment was when a woman in a spanking red Ferrari refused to make way for the bus - this is apparently bad etiquette; the post must get through - we all enjoyed the spectacle of her boyfriend screaming at her and wildly gesticulating with parallel forearms to get over to the goddamned right-hand side of the road. She ignored him and the post-bus's incredibly loud horn

Nothing doing, she said, with a shake of her youthful brown curls and a tilt of her retrousse nose, and the bus with its 60 or so passengers reversed back up the mountain to let her by. As an ardent feminist I applaud her stand.

After a spectacular dinner at Trani restaurant around the corner from my hotel; the Federale in Lugano, it's off on my most ambitious trip yet.

Reasonably clear headed despite the excellent local wine, I tackle the Wilhelm Tell Express, a combined train and boat trip on Lake Lucerne from the difficult to pronounce Flulen.

Again the connections are smooth, the walk from the station to the wharf comfortable.

With connecting trains, you faff around at your peril, but the train-boat connections in Switzerland are much more forgiving. The dining on board is first class, and the scenery that drifts past as we steam along is _ I swore I wouldn't use the word - but the lakeside villages look like something you would put on a rectangular piece of cardboard that you write on the back of and send to your friends and relos to make them jealous. The word begins with p .. !

There were many more rectangular cardboard picture moments to come. Meanwhile, in Lucerne I visit an unbelievably cool rooftop bar on top of the Astoria Hotel packed with gorgeous Swiss girls.

Lucerne, is a city of old bridges, absurdly large beers, beautiful women and is crawling with Swiss guards in their gaudy uniforms - mercenaries being one of the nation's principal exports for centuries.

People sit on the lakefront, drinking absurdly large beers, and Asterix-like, dip their forks or more likely bayonets, tipped with hunks of bread, or maybe chunks of wild boar, into cauldrons of melted cheese and wine

And so on to Interlaken. Before World War I Swiss engineers began tunneling into the heart of one of the highest mountains in Europe; the Eiger.

I ride up the Jungfraubahn to the Jungfraujoch, the young wife's saddle, through the middle of the mighty granite mountain.

The middle station is called the Eigerwand, and the gallery there, halfway up the mountain look was made famous in the movie The Eiger Sanction with Clint Eastwood.

The research station on the Jungfraujoch was made famous in the book The Day After Tomorrow, because it was here a group of neo-Nazis had stashed "the deep frozen head of Adolf Hitler''.
I'm told many of the waiters catch the train up, but parachute down the 5km to Interlaken at the end of their shift.

Back at my hotel the sky is chock a block full of parachuting waiters, or possibly tourists following their example.

Then it's on to another spotless train for the ride to Montreaux - and that is what the doctor ordered and why the preacher danced.
Come, stand with me on the shores of Lake Geneva. Gaze across at Evian in France (yes the one where the mineral water comes from). It's 5km or so away and detail is lost in a grey haze.

On our left, 15km away up the lake, is Italy. And on our right, just 2m away is a bar on the lake shore selling fresh Lake Geneva perch fillets for $7 a plate, cauldrons of melted cheese mixed with wine (I'm so fond of fondue) complete with hunks of bread and bayonets (fix bayonets, men).

What shall we do? Um … pull up a chair, order an absurdly large beer , grab a bayonet and contemplate how good it is to be alive.
Montreaux is the home of Nestle and Charlie Chaplin spent some time here, still happily breeding into his 80s.

I fall easily into conversation with a group of foreign lady students form New York City. Their mobile phones resemble the crown jewels. Even their diamonds are diamond encrusted.

I flash my train pass and it's a few minutes' ride to Vevey, which is where the Lake Geneva fillets were on sale.

Then dinner at Le Saxo in the Casino of Montreux. I'm told the old casino burned down, and the occasion was the inspiration for Deep Purple's Smoke on the Water.

I sit in the old town square, breathe in the history of this place, watch the spectacular scenery and the girls giggling as they run through the rain. All too soon it is time to leave this fairyland of rectangular cardboard images and head home.

Throw convention out the window in Geneva

Amy Hughes “Zurichers come to Geneva to laugh,” our taxi driver says with a smile. If Zurich is known for it’s Germanic style of keeping time and order (none of which are bad things), Geneva is known for it’s French influence on life, which, roughly translated, means a slightly greater emphasis on enjoyment, rather than …

Throw convention out the window in Geneva Read More »

Switzerland's always ready for its close-up

Mark Eggleton It’s 8am in Weggis on Lake Lucerne and our guide Roland stands at the bus stop across from the Post Weggis hotel waiting for the 8.04am bus. Around 45 seconds past 8.04am the bus arrives and I suggest the bus is late and the whole Swiss system is about to collapse. “No Mark, …

Switzerland's Lake Geneva Region – encompassing the “Olympic capital”, Lausanne and Montreux Riviera – is known as a haven of high-quality food and wine. Lausanne boasts a picturesque setting built on three hills that are surrounded by vineyard-covered slopes, with Lake Geneva at its feet. Spanning thirty kilometers from the Chateau de Chillon to the …

All Dolder-ed up and Oprah says to go

Amy Hughes Just a week after Oprah tweeted, “best spa ever", I arrive at the Dolder Grand Hotel, perched in the steep hills above Zurich. As endorsements go, they don't get much better than Oprah. The evangelical star stayed at the Dolder Grand while in town to attend Tina Turner's wedding and browse pricey handbags. …

All Dolder-ed up and Oprah says to go Read More »

The guests dining at the Badrutt’s Palace Hotel in St Moritz, nestled in amongst Switzerland's Engadine Valley, aren’t the only noteworthy subjects in the room. The walls of Le Restaurant's 100-year old dining room are adorned with an historic and valuable wallpaper known as ‘Eldorado’. Eldorado is made by world famous wallpaper factory Zuber et Cie …

Ski your way through Europe

With the drop in temperature, winter sport enthusiasts are itching to hit the slopes. From the subarctic wilderness of Sweden to the vast reaches of the Swiss Alps, here are some of Lunch Mag's favourite winter hideouts. Nordic Wilderness in Åre In the premier Swedish ski destination lies Copperhill Mountain Lodge. The 112 earth-toned guestrooms feel …