that spring to mind.

Who needs a tour to taste all three in Istanbul? The streets are lined with sweet shops, all fronted with glass cases stacked high with piles of colourful, sugary lokum (Turkish delight).

Some even come kebab-style, tall towers of Turkish delight, individual portions freshly sliced. Coffee shops are sprinkled through the Grand Bazaar, and kebabs are simply everywhere.

So why would I need a tour to indulge in these other Turkish delights? Plus, I’m not a tour person. At all. Actually, I’m the anti-tour person. On a recent press trip to Perpignan, with just one hour to explore the city, I broke off from the guided tour to wander on my own, hoping to get a feel for the city. I would be a nightmare on any adult field trip.

But, when a fellow food writer, also averse to tours, suggests Istanbul Eats, and points me to their website, my usual cynicism disappears.  In fact, Istanbul Eats has just been awarded best food blog of the year.  Expats, Ansel Mullins and Yigal Schleifer are behind the site, a small book, and a team of local guides, offering three different tours: one in the Old City, one in Beyogulu, the cosmopolitan European quarter, and a kebab krawl. I decide to take the Old City tour for a look at the traditional foods filling the backstreets of Istanbul.

American expat Megan Clark meets me on a rainy Saturday morning for what winds up being a private tour.  Two others were booked, but it sounds like they may have eaten some bad kebab the night before.

We head straight into the narrow alleyways of the Old City where our first stop is a late morning snack of sweetbreads.  Gorkem was given two choices when he turned 18: he could go to University, or his father would pay a master craftsman to teach Gorkem a trade, as an apprentice.  Gorkem, now 26, chose the fine art of slowly turning three different kinds of sweetbreads over hot coals.  It may sound like a simple job, but Gorkem is so popular, he’s put all the other vendors out of business.

And, when he had to take a day off, customers noticed his stand-in just didn’t produce the same sandwiches.  Gorkem does well enough, that when his three skewers of meat are gone, so is he. Megan tells me the trick is in the timing.  Go too early, it won’t be ready, too late, and he’ll be gone. Midday feels about right.

I skip the sweetbreads, savouring the story instead.  We turn the corner to find a tiny hole in the wall where it’s too early for the standing-room only lunchtime crowd who flock here for the home-made tomato and lentil soup.

I’m not a big soup person, but this is delicious, especially on a rainy day.  Next is an authentic, wood-fired pide stand.

Pide is like a Turkish pizza, though Megan tells me because the dough is supposed to be made without preservatives, it doesn’t make for good delivered food.

The dough gets tough and chewy.  The canoe-shaped pizza is filled with cheese, tomatoes, parsley and a number of other toppings.

We pass by local market stalls selling all sorts of goods, from brightly coloured nautical bags in blue, green and orange, to gardening gear, and kitchenware, on our way to a 147-year old sweet shop.

Think of a penny candy shop and you’re here.  Wooden cabinets stock none of the exotic, unauthentic Turkish delight flavours one finds on the tourist route.  They stick to the best basic gummy flavours, dusted in sugar - the original rosewater, lemon, pistachio, each bite melts in my mouth. 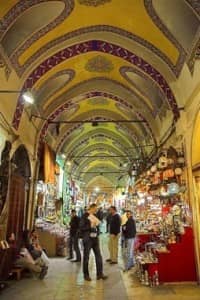 And the shop front is filled with halvah, but not just the sesame one. There’s almond, and hazelnut, too (they’re indigenous to Turkey).  We buy a slice of almond for the road, Megan intent on showing me the best place to enjoy it.

A few more corners turned, and we’re in a courtyard dating back to the Ottoman Empire.  Just a few old man sit around small, plastic white tables under umbrellas as the raindrops fall away, and the sun emerges.

This is a place no tourist will ever find without Istanbul Eats.  Megan orders tea in perfect Turkish and we sit down on stools where I learn that Turkish tea is the perfect thing to wash down halvah.  I forget about everything else I’ve tasted, and relish the moment.

After some quiet time absorbing the history of the courtyard, and licking my lips of the halvah, we head up to the residential Fatih neighbourhood to try Boza, a fermented millet drink at a cafe with original tile floors dating back to 1876, and art deco mirrors.   The place has been kept intact.

Hooks for the old gas lamps remain on the ceiling. The drink itself is thick and milky, topped with cinnamon and roasted chick peas.  It’s said to be rich in nutrients, and a popular winter drink, especially for those who toil away with their hands for a living (no, I’m not talking about writers). 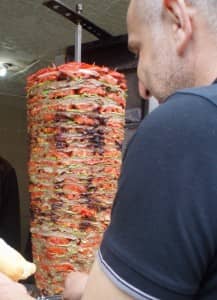 I take a sip, but save room for lunch.  It’s early afternoon, and after several “starters” we’re in the Kurdish neighbourhood to dine at Seref Buryan, a restaurant that’s been in an Arab noble family since the late 19th century.

On the way, we indulge in wonderful balls made of red pepper paste and walnuts. The best part about the tour is that Megan has gone through the foods I like and don’t, to tailor it to my tastebuds.

I haven’t said much about the kebab shop where we met two of Megan’s previous customers, so good was it they found their way back. And it did look good, with unusual layers of peppers, onions and aubergines.

But back to the Kurdish restaurant.  We order traditional pilaf, or pilaf, as we know it.  What arrives, is a rounded dome of pastry which we slice open to reveal a mound of rice mixed with chicken and raisins.  It’s tasty, and I love watching what the locals eat (there are no tourists here). But the best part is the baklava that arrives for dessert, made by a neighbourhood woman who I’m told never leaves her home. Megan and I debate whether we prefer the traditional triangular pastry, or the small, squatty cigar-shaped ones done in reverse, with mostly walnuts and a bit of pastry.  “I go back and forth,” Megan says.

Over lunch we discuss everything from local food, to the latest wine boom, and what it’s been like living in a place that used to only conjure up images of rat-infested prisons a la Midnight Express, but has now become an exotic symbol of East meets West with an enviable economy. 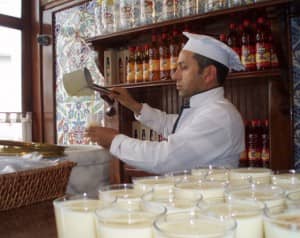 Istanbul Eats is a great way to absorb the city. Beyond being a source of great, insider food knowledge, it’s also a source of great local stories, and a chance to get under the skin of Istanbul.  I’m only glad Ansel and Yigal haven’t expanded beyond Istanbul. I’m sure my waistline would expand along with them.

Bosphorus hotel strictly off the straight and narrow

Amy Hughes At the edge of the Bosphorus, on the Asian side of Istanbul sits the Sumahan on the Water Hotel. This is a place for those in the know, literally. It’s bad enough most Istanbul cab drivers make fake promises of knowing their way around, but read out the Sumahan’s address, just outside the …

Bosphorus hotel strictly off the straight and narrow Read More »