It’s 8am in Weggis on Lake Lucerne and our guide Roland stands at the bus stop across from the Post Weggis hotel waiting for the 8.04am bus. Around 45 seconds past 8.04am the bus arrives and I suggest the bus is late and the whole Swiss system is about to collapse.

“No Mark, your watch is wrong,” Roland says straight-faced. The previous evening Roland had told us to be at the bus stop by 8.04am and no later or even much earlier. He then suggested we would be changing buses at 9.03am in Schwyz further up the highway as we made our way to where we would meet Ivan Steiner of Morschach-Stoos Tourism at 9.24am. He was right. 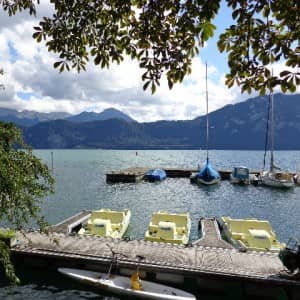 Roland was very right and seemed to be most of the time. Even when we met Ivan and our group was treated to a rare duelling guide display, Roland was pretty much right. I must admit to liking duelling guides where each guide leads the group on a slightly different version of an area’s history and sights. Occasionally the other butts in with a minor correction or a bigger fish story or something they’ve done that’s even more dangerous. My previous favourite had been at the Vatican where two guides loudly told completely different stories while trying to drown the other out although one of them was just making everything up on the spot (which was more interesting anyway).

This particular battle was very close until Roland pulled out the big guns and beat Ivan with a classic William Tell myth manoeuvre followed by a snowshoe and fondue story involving blizzards and a cliff top restaurant. I loved the man.

Weird thing is neither guide really needed to tell us anything. Switzerland doesn’t need an explanation. It’s a country always ready for its close-up. It's hard to believe but it was once the poor cousin of Europe full of unhappy farming types. This probably explains its lack of castles and palaces lining every valley and sitting beside every lake (although there are 7000 lakes in total which would have meant castle overload). Things did change rapidly though when the Swiss decided they were good with looking after other people's money, renting out mercenaries and making timepieces. And everything does run unusually smoothly – trains, buses, planes and people. Moreover, it’s exquisitely beautiful.

The previous evening I had sat on the edge of Lake Lucerne in the PoHo bar across from the Post Weggis hotel. A low knee-high hedge ran along the shoreline and the water occasionally gently lapped against the rock wall when a boat or ferry went past.

It was around 22-degrees Celsius and the last of the sun’s rays were pushing themselves across the lake like a fading torchlight. At the same time, lights on the water and the surrounding hills switched on and flickered like distant candles. And after a day’s work providing photo opportunities for tourist ferries a lone swan flew centimetres above the water on its way home. Its wingtips gently feathering the water as it built momentum.

It was an idyllic late summer evening. I had barbecued chicken kebabs and grilled vegetables and a little wine in front of me and I was staring at the mountains rising from the lake’s edge all around me. The lower levels were wooded and above them smooth, green pastures rose at different angles as if they were once a giant billiard table that had been pushed up from below. Near the peaks year-round glaciers looked like vanilla ice cream bursting out of its clean, green wrapping below.

The evening beauty of Weggis had been matched earlier in the day as I wandered around and in-between the hamlets of Rigi above the village. It was a short cable car ride away. Just up the mountain using my Swiss Pass, which I was utilising to the maximum at if afforded virtually unlimited travel on trains, buses and cable cars throughout Switzerland.

I had traversed through mountain meadows full of summer flowers and wandered along roads where dairy cows munched on tall juicy grass and their bells clanged tunefully with every chew. At the Rigi Kulm Hotel (around 1800 metres above sea level) I ate a passable beef stroganoff matched with cauliflower dressed with seeds and flower petals.

Memories of Rigi Kulm came flooding back as I sat outside at Alpwirtschaft Laui enjoying cheesemaker Wisel Fassbind’s hospitality. Again I had wandered through incredibly beautiful mountain scenery in my trek from Stoos, but this time I had Roland and Ivan providing a constant commentary. Much of it was on cows and the cheese of Wisel.

As it happens Wisel makes all his cheese from the few cows wandering the mountains around Stoos in the summer months. His products are incredibly rich and fresh tasting and are made at his tiny mountainside dairy every day. He also runs a small guesthouse for skiers in winter and is a favourite luncheon drop-off point for skiers and summer hikers as well.

Our small group is served up a high-end cheese toasty with ham and we wash it down with a local Dinkel Einsiedler Bier. After a morning of wandering the mountains and breathing pure, fresh air it was the ideal luncheon – hearty, stomach filling comfort food matched with a slightly sweet brew. A nap seemed a fine idea but we pushed on back to Stoos down the mountain.

Then it was back onto Swiss public transport and a quick trip to Morschach’s Swiss Holiday Park. We were scheduled to arrive at 4.40pm but we arrived at 4.41pm plus a few seconds … I looked at Roland. I adjusted my watch accordingly. Roland nodded his approval.

Throw convention out the window in Geneva

Amy Hughes “Zurichers come to Geneva to laugh,” our taxi driver says with a smile. If Zurich is known for it’s Germanic style of keeping time and order (none of which are bad things), Geneva is known for it’s French influence on life, which, roughly translated, means a slightly greater emphasis on enjoyment, rather than …

Throw convention out the window in Geneva Read More »

Switzerland's Lake Geneva Region – encompassing the “Olympic capital”, Lausanne and Montreux Riviera – is known as a haven of high-quality food and wine. Lausanne boasts a picturesque setting built on three hills that are surrounded by vineyard-covered slopes, with Lake Geneva at its feet. Spanning thirty kilometers from the Chateau de Chillon to the …

All Dolder-ed up and Oprah says to go

Amy Hughes Just a week after Oprah tweeted, “best spa ever", I arrive at the Dolder Grand Hotel, perched in the steep hills above Zurich. As endorsements go, they don't get much better than Oprah. The evangelical star stayed at the Dolder Grand while in town to attend Tina Turner's wedding and browse pricey handbags. …

All Dolder-ed up and Oprah says to go Read More »

The guests dining at the Badrutt’s Palace Hotel in St Moritz, nestled in amongst Switzerland's Engadine Valley, aren’t the only noteworthy subjects in the room. The walls of Le Restaurant's 100-year old dining room are adorned with an historic and valuable wallpaper known as ‘Eldorado’. Eldorado is made by world famous wallpaper factory Zuber et Cie …

Ski your way through Europe

With the drop in temperature, winter sport enthusiasts are itching to hit the slopes. From the subarctic wilderness of Sweden to the vast reaches of the Swiss Alps, here are some of Lunch Mag's favourite winter hideouts. Nordic Wilderness in Åre In the premier Swedish ski destination lies Copperhill Mountain Lodge. The 112 earth-toned guestrooms feel …

The runs up here in the Jungfrau (young bride) region of Switzerland’s Bernese Alps are some of Europe's best for my money, with a vertical drop of over 3km in a few miles. And I love these names – they fall trippingly off the tongue: Come stand with me on the Kleine Scheidegg and gaze …