There are two prevailing popular visions of Los Angeles: the hard-partying nightlife of Hollywood, nights out on the Strip and in clubs on the West side, and the California dreaming of the canyons and beaches of Santa Monica. Both of these visions are evoked by W Hotels very different boutique takes on LA: the W Hollywood, and the W Los Angeles in Westwood.

In the city essentially built deliberately to be inaccessible without aide of a car, the W Hollywood is conveniently situated smack on top of one of LA’s few subway stops that will take you in short order downtown. Even more conveniently, it sits right near Hollywood and Vine, letting you to gaze down from your generous windows upon the Walk of Fame stars, or across the street at the Capitol Records Building where once Nat King Cole and Frank Sinatra cut albums including Frank Sinatra Conducts Tone Poems of Color.

But the truly spectacular views are reserved for the roof-top pool and bar, known as Wet in W parlance. Here you will enjoy an uninterrupted 360 degree vista of the entire city from the Hills to downtown and out to Santa Monica. Full-service pool-side cabanas in the form of California king day beds can be rented here into the early evening, when the adjoining indoor restaurant and bar is transformed into the insanely popular Drai’s nightclub. The pool-side bar is an ideal spot for a swim (in October! Viva Los Angeles) and a few quiet drinks before heading out to explore the town.

Speaking of bars, the W Hollywood has five, and as hotel management are wont to remind, in theory you could not leave the hotel and have a fine time sampling only its in-house comforts if you wanted to bunker down for a few days of indulgence. This is a pretty damn spectacular way to do LA, whether you’re stopping off after fifteen hours of flying, or about to board that flight back home. Hotel management also helpfully turn a blind eye to anyone who wants to take the party back to their room, which in the case of the 1,660 square-foot Extreme Wow Suite, makes perfect sense: it’s dining area alone seats seven. A two-person shower, enormous tub, its screened-off big kids “kiddy corner” and full-service bar – all leave little doubt as to what this party suite is made for.

Being Los Angeles though, you’re never far from a well-appointed gym and rooms are all fully catered for the doing of business with wireless internet everywhere, and a sleekly hidden charging station for any variety of gadgets. It’s seamless integration of business and pleasure means the hotel’s enormous conference rooms are wall-to-wall booked during awards season. 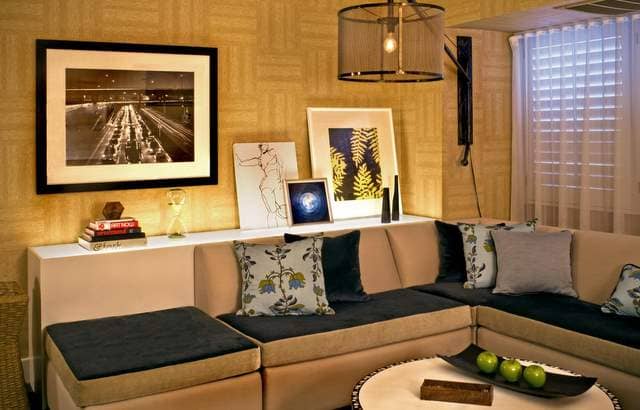 While the design of the W Hollywood is all sleek, clean lines, towering atriums and white surfaces with a surfeit of natural light pouring in, its sister a short ride across town off Rodeo Drive, is completely different. The W Westwood is all earthy California tones, dark hardwoods and low-lighting which instantly evokes the relaxed, laid-back flip-side of the city. So laid-back that at the poolside restaurant and bar ringed with trees and lawn, the staff have hand trained a friendly squirrel, feeding it nuts which it happily gnaws on placidly a few feet away. Food and beer here is on the extremely affordable side, with the ubiquitous sliders and burger bar food kicked up a notch, and complimented with a huge array of boutique brewed matched beers. Scarf this down by the heated pool and if you don’t feel like venturing out to the Strip, rock bands in-residence play shows every week.

Acknowledging the LA patron oft-accessorised with a tiny dog, the W Westwood is a pet-friendly hotel, extending their furry accommodations beyond the squirrels. Westwood is also appointed with a generous pool and cabanas, a sun-drenched retreat which is somehow transformed in winter into an ice-rink complete with man-made snow.

Rooms in Westwood range from the Wonderful Studio at $350 per night including taxes, up to the Extreme Wow Suite, which in Westwood also includes your own screening room. Where Hollywood is for hedonists, Westwood is for recuperating. It’s renowned day spa, Bliss, attracts many of Hollywood’s leading men and women keen to buff their visage in completely private seclusion. Book a facial before heading off on a day-long haul in a recycled oxygen tube and your skin will thank you when you touch down on the other side.

Money travels far on eating and drinking in LA, which makes it easy to pretend for the duration of your stay that you actually are a rock star. An unwelcome surprise on returning back home to Earth.

Manhattan’s most famous green space, Central Park, sprawls through the center of Gotham City. But, edge a bit further out … and a 20-minute ride on Metro-North’s commuter train will take you to the New York Botanical Gardens(NYBG) in the Bronx. Welcome to 250 acres of tranquility – in New York City. It’s autumn, the …

People say you get what you pay for. But that’s not always, strictly the case. At Yale University’s Center for British Art, it’s most definitely not the case. An hour and a half’s drive from New York City will deliver you to New Haven, home of the ivy-clad heart of America’s ivy league. In the …

Jake’s Hotel is a Caribbean treasure

For hedonists in search of a quiet patch in a sometimes troubled paradise, the ocean views and spiced jerk chicken aromas at Jake’s Hotel in Jamaica immediately seduce the visitor. A modest family-owned hotel, Jake’s is only a nine-minute walk from the pristine waters and string of secluded coves known as Treasure Beach on Jamaica’s …